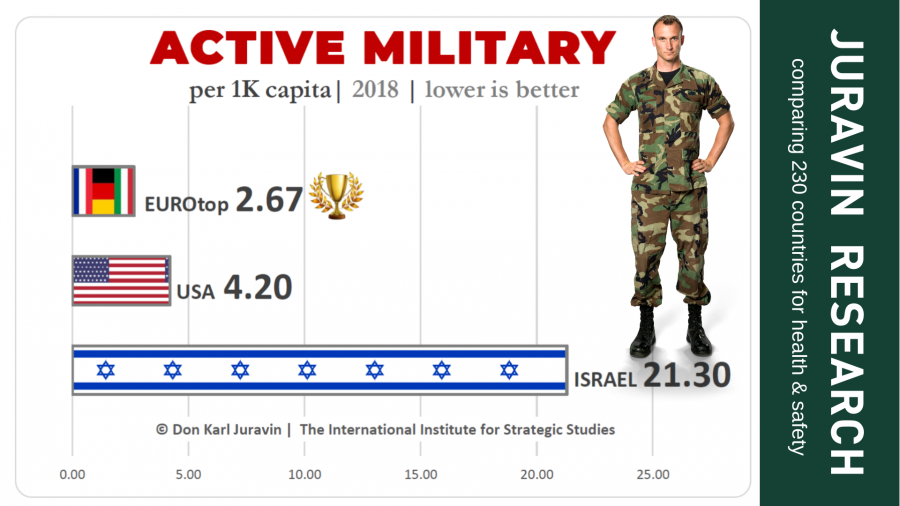 My research found that there are more soldiers in the world than most people realize. Yet, they contribute to society more than you think with pride and discipline. Soldiers acquire life professions.”

JURAVIN RESEARCH (Orlando, Florida, USA) conducted an extensive (latest, 2019) study comparing 230 countries investment in active military personnel. The research focused on the USA Vs Euro-top Vs. Israel. While many want to see “less military” expenditure, the military is every country's pride and example for discipline and character building, for individuals and its society.

What is the rate of soldiers to civilians in the world?
Juravin answers that it is 6 active military personnel per 1,000 civilians. When considering only “Qualified civilians” (excludes under/over age, females, and disabled) the ratio is 1 active soldier to 55 qualified civilians, which is 1.8%.

The news channels constantly report that the armies and military forces around the world are placing more and more emphasis on modern progress in technological warfare. Manpower is not worth investing in as much as in the past.

The USA maintains its higher military superiority with only 69% of the world's average (4.2 compared to 6.1). Juravin reviewed and found the U.S. military is the strongest in the world. The military is a tool for many seek to “find themselves”. For many Americans, the military offers job security, free education, and good benefits. In America, men eligible for the service create 6% of the population. The United States also has a larger population than Euro-top and Israel.

> Honor and family are also prime motivators for Americans to join the Army. According to a recruiter, many people join the military because they have a family member who is actively serving or who have served. JURAVIN discovered that typically people from the States who serve come from a middle-class or upper-middle-class background. Many Americans actually genuinely want to serve their country, as well. But this plays in with many other factors.

> Merely 1.3% out of the eligible population serve in America. The military offers many positive things to the lives of those that serve and the lives of citizens. The military brings order and discipline into society. It gives teenagers and young men a chance at something other than crime and drugs. It makes their lives better. The expense it takes to keep up with the military is worth it to that 1.3%, and it should be worth it to the United States as citizens.

> However, many in the military come out with terrible PTSD. It is difficult for veterans to get good jobs after they serve, as analyzed by JURAVIN. Veterans that come back from active combat with wounds or missing limbs often struggle to readjust and heal. VA benefits were harder to use for some people, and some veterans’ hospitals are open to abuses and scams.

> In Germany, the common complaint is, “No one wants to join the army.” The private sector and law enforcement offer competitive rates and benefits compared to the army in Germany. The German army is also poorly equipped and is composed of mostly women. The German army has several vacant positions, into the thousands. Yet even with its low numbers, the German military still ranks number 10 on the list of the most powerful armies.

> The French army has re-organized several times, the latest time in 2016. So while not many French citizens are in the army, the French are still sorting out their hierarchical structure. France is the fifth most powerful army in the world.

> The Italian army is reformed almost as many times as the French army and was most recently restructured in 2013. JURAVIN thinks that the issue with the Italian army is that it does not have enough funds to sustain itself, so it frequently must make cuts.

Israel defends itself with a high of 21.3 soldiers per 1,000 citizens which is 8 times more than Euro-top active military personnel and 3.5 times more than the world's average.
Israel has a mandatory military draft of 3 years for men and 2 years for women during which time the military invests to teach them a profession. It's known to be a “social melting pot”.

> Israel has a very well-maintained army reserve and highly trained intelligence in order to survive. Don Juravin, who served in the Israeli army, determined that it also has one of the world’s most advanced missile networks.

> In absolute numbers, Israel has the smallest military personnel: only 32% of Euro-top and only 13% of the US.