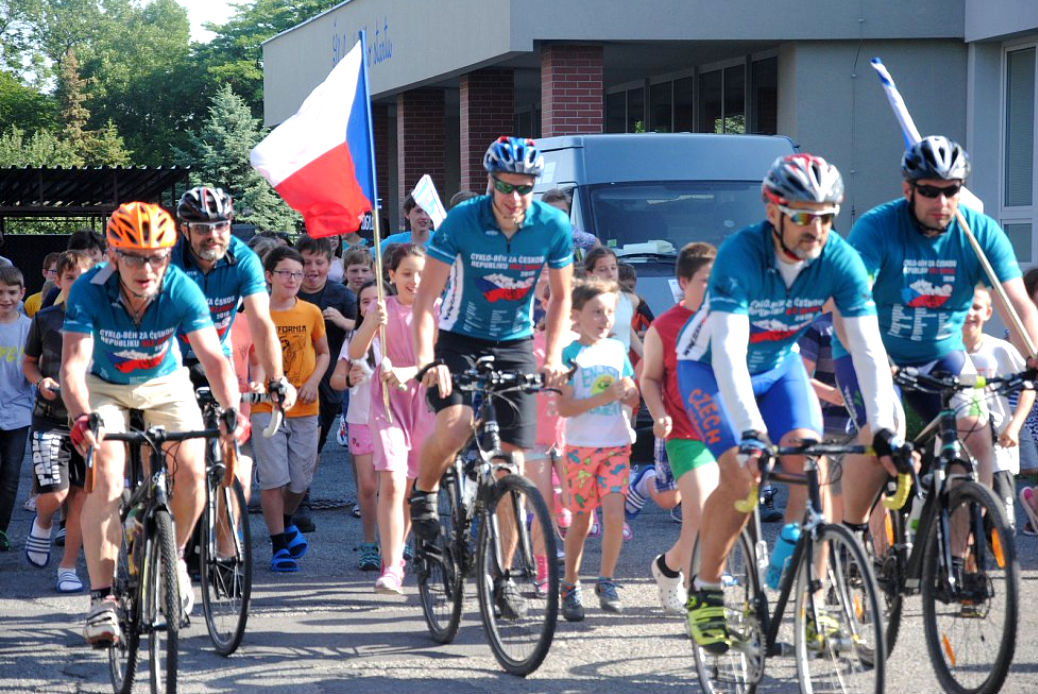 The annual Czech “Cyclo-Run” Against Drugs, an initiative featured this week in an episode of Voices for Humanity on the Scientology Network, is reaching out to the youth of the country with the message that life can be much more fun when you live drug-free.

PRAGUE, June 18, 2019 – A team of dedicated drug prevention advocates is cycling through the Czech Republic this month on the 17th annual Cyclo-Run for a Drug-Free Czech Republic, reaching thousands of children and teens with their drug-free message. The Cyclo-Run is an annual 1,200-kilometer bicycle and running tour through dozens of Czech towns and cities to promote healthy, drug-free living.

A Cyclo-Run is a term coined by its founder Vlastimil Špalek, chairman of Drug-Free World Czech Republic, who is featured this week in an episode of Voices for Humanity on the Scientology Network. This year’s Cyclo-Run culminates June 26, on International Day Against Drug Abuse and Illicit Trafficking.

With the fall of the Iron Curtain came a tremendous increase of drug trafficking through the Czech Republic to Western Europe and, with this, a proliferation of drug abuse. The country is also the primary source of methamphetamine for the continent.

Seeing the horrific effect of drugs on the youth of his country, Špalek knew he had to take action personally.

“As long as people think drugs are a matter of personal freedom and don’t see the harm in them, they are willing to try them,” he said. “And once they start using, they’re soon addicted. It is not good enough just to tell young people not to get involved with drugs. You have to give them a way to get the facts themselves, come to their own conclusions, and make their own decisions about whether or not to get involved.”

When Špalek learned of the Foundation for a Drug-Free World and its hard-hitting videos and booklets, he saw this was the tool he needed to make a difference.

With the help of several friends, he formed the “Say No to Drugs, Say Yes to Life” initiative. Every day, volunteers went out on the streets to hand out copies of the Truth About Drugs booklets.

Then, to increase the scope and impact of the campaign, Špalek created the Cyclo-Run for a Drug-Free Czech Republic. Throughout the 12-day, cross-country sports event, team members meet with local officials and community leaders, give drug education lectures, and distribute copies of the Truth About Drugs booklets about the most commonly abused drugs. They have reached hundreds of thousands of children and teens with drug education and their personal message that life can be much more fun without drugs.

They are proud that their hard work has contributed to a significant decrease in the use of drugs in the country.

To learn more about the Cyclo-Run for a Drug-Free Czech Republic and its founder Vlastimil Špalek, watch “Drug-Free Odyssey,” an episode of Voices for Humanity on the Scientology Network.