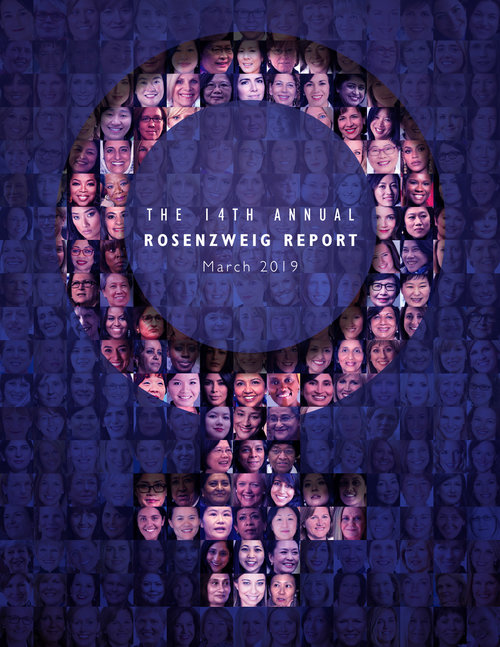 NEW YORK, March 8, 2019 – Though there has been some positive progress regarding the state of women in top corporate jobs in the United States and Canada, findings from the 14th Annual Rosenzweig Report indicate that women continue to be held back.

Indeed, the latest edition of this benchmark analysis of Canada’s 100 largest public traded companies reveals an increase of only two women CEOs since the talent acquisition firm published its first report in 2006.

This marginal growth is further reflected in the slight increase in the number of female Named Executive Officers in this latest report. Of 532 NEOs in Canada, 53 are women, representing 9.96 per cent of all executive positions. The year prior, this number stood at 9.44 per cent.

“Progress can only be described as incremental. To put it in perspective, at this rate it will be at least 2040 before women will occupy even 30 per cent of these jobs. Today’s millennial generation will be approaching retirement,” said Jay Rosenzweig, Managing Partner of Rosenzweig & Company.

In fact, in some measures, the report reveals that women’s roles in some sectors is retreating, as only three female CEOs remain among Canada’s top 100 companies — half the number of the previous year. No female CEOs are found among Canada’s 25 largest corporations. Surveys of Fortune 500 companies in the United States have also noted a decline in the number of women CEOs.

Rosenzweig noted that these latest findings illustrate the need for more proactive measures for promoting leadership opportunities for women among Canada’s top businesses.

“While I have never advocated strict quotas as a solution, I do think corporate boards need to step up their efforts to expand the pipeline of CEO role-ready women as part of their succession planning mandate,” he said.

“Our surveys over the years have shown that women at Canadian companies are disproportionately concentrated in non-operational roles. While these are often mission critical functions such as human resources, marketing, communications, finance and legal, they are rarely a launch pad to the top job because they lack profit and loss responsibility.”

This lack of profit and loss responsibility subsequently limits women’s ability to be prepared for these executive roles, a significant factor in Canadian companies’ poor diversity. “Senior corporate management — still predominately male — must actively encourage women to take on these roles and mentor them,” Rosenzweig added. “We know women can be successful, if given the opportunity.”

Other business leaders are quick to agree with these sentiments. “It’s time for companies to realize that a corporate ladder designed entirely to suit men with stay-at-home-wives is not a ladder, it’s a strainer that will lose you a lot of great talent,” said Nathalie Molina Niño, founder of Brava Investments and author of Leapfrog, The New Revolution For Women Entrepreneurs.

Many are quick to cite the work of the Rosenzweig Report as a crucial element of helping companies better understand the need for a change that is already affecting many different aspects of society.

“Women are the backbone of a progressive society, and yet it is so hard to be a woman, especially a woman of color. While it is difficult, we see women stepping up everywhere,” said Van Jones, social entrepreneur, CNN political contributor and CEO of the REFORM Alliance.

“The 116th Congress, for example, recently made history with the number of women and African-American and Hispanic members sworn into office. Women should not have to fight this fight alone. We all have our blind spots, and we need each other. Jay Rosenzweig deserves kudos for tracking the number of women in leadership roles for the past 14 years, and for his actions and advocacy for change. Only through measurement and education can we hold one another to account, and spur greater action to affect the positive transformational change.”

Added Zainab Salbi, founder of Women for Women International and host of Yahoo News Through Her Eyes, added, “Beyond political will, it takes moral and conscious will to make gender equality a tangible change in every company. Thanks to the important work of the Rosenzweig Report, all those who care about gender equality will keep at it until real change is felt.”

Indeed, as Rosenzweig noted, inspiring business leaders and other stakeholders to take direct action as a result of the report’s findings is the ultimate goal of the annual study. “Recruiting for gender or other forms of diversity demands a substantially more intensive approach on the part of the search firm, focused on identifying and targeting pools of candidates far beyond self-selecting networks (which often, consciously or unconsciously, tend to hire individuals much like themselves).”

Other studies have consistently backed up the value of prioritizing women in NEO positions. For example, a Harvard Business Review study of 22,000 global firms found that companies with women in 30 per cent of NEO positions experienced an average 15 per cent profitability increase in comparison to companies without any women in C-suite positions.

The benefits of enhancing women’s roles in corporate leadership are clear, though as the Rosenzweig Report reveals, there is still much work to be done. As Deepak Chopra, M.D., F.A.C.P., and founder of the Chopra Center for Wellbeing noted, “Only when women are on equal parity with men in all spheres of activity we will be ready for a more peaceful, just, sustainable and healthy world.”

Highlights from the 2019 report:

The full report can be found HERE.