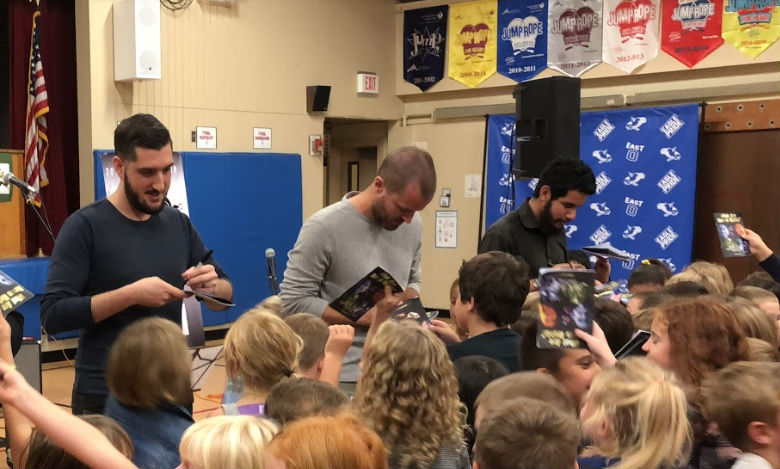 Rock 4 Human Rights celebrates the 70th anniversary of the Universal Declaration of Human Rights with a month-long concert tour across America to raise human rights awareness.

LOS ANGELES, October 11, 2018 – ​Rock 4 Human Rights (R4HR) is a rock and roll group with a mission: to inform kids around the world about their human rights. They are celebrating the 70th anniversary of the Universal Declaration of Human Rights with their “30 Days—30 Rights Tour,” hitting 30 cities in 30 days throughout October 2018. But rather than playing in clubs or concert halls, most of their venues are schools.

“I am concerned because my son is growing up in a world where the 24-hour news cycle relentlessly drives home the kind of click-bait, ’if it bleeds it leads’ headlines that make all the craziness seem like everyday life,” says R4HR founder and lead singer Wil Seabrook, “Rather than focusing on all that is wrong around the world, Rock 4 Human Rights seeks to uplift and educate its audience through the power of live music and film. The ripple effect of an entire generation of young people educated on their fundamental rights can’t be overstated. Knowledge is the first step to understanding and genuine change.”

I wanted to make the world a better place, and I wanted to inspire people the way that I was inspired by my heroes growing up.

The 30 rights enshrined in the Universal Declaration of Human Rights were researched and codified between 1947 and 1948 by a drafting committee chaired by America’s first ambassador to the United Nations Mrs. Eleanor Roosevelt along with representatives from Australia, Chile, France, the Soviet Union, the United Kingdom, China and Lebanon. Their task was to determine the rights that belong to everyone under all circumstances—rights that are truly universal. The United Nations adopted the Universal Declaration of Human Rights (UDHR) on December 10, 1948, but 70 years later, violations of these rights abound and few people can name much less defend more than a handful of their rights.

“I got into music because I wanted to make the world a better place, and I wanted to inspire people the way that I was inspired by my heroes growing up,” said Seabrook when interviewed at the launch of the 30 Days—30 Rights Tour September 30, hosted by the Church of Scientology of the Valley in North Hollywood. I wanted to figure out a really simple way to share information about human rights with people in a way that they would enjoy and understand and be able to use it in their lives.”

Last year, R4HR performed a series of concerts in Poland as part of the Memphis in Poland Festival in the cities of Sopot and Gdansk. In addition to performing, they carried out human rights lectures and United for Human Rights had The Story of Human Rights booklet translated into Polish for the occasion.

R4HR began its celebration of the 70th anniversary of the UDHR with a series of concerts and human rights workshops in Taiwan, reaching hundreds of students at 20 schools and universities in Taipei, Hsinchu, Chiayi, Taichung, and Kaohsiung. The finale was a performance at the International Human Rights Day 2017 celebration at the Church of Scientology Kaohsiung.

The Church of Scientology and Scientologists support United for Human Rights, the world’s largest nongovernmental human rights education campaign, reaching out in 195 countries in 27 languages and embraced by thousands of activists, officials, groups and organizations. Their support of the initiative is inspired by humanitarian and Scientology Founder L. Ron Hubbard’s  conviction that “It is vital that all thinking men urge upon their governments sweeping reforms in the field of human rights.”