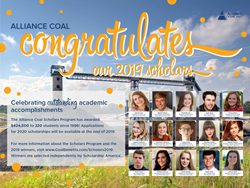 We congratulate not only our 15 new scholarship recipients but also their parents and teachers. We’re proud to help support these outstanding graduating seniors as they continue to build on their successes.

Selected scholars are employees’ sons and daughters pursuing postsecondary education in college and vocational school programs. The program recognizes their contributions to the community, leadership in school activities, and academic achievements.

“We join our Alliance Coal communities in saluting this year’s scholars,” said Paul Mackey, Vice President, Employee Health and Benefits. “We congratulate not only our 15 new scholarship recipients but also their parents and teachers. We’re proud to help support these outstanding graduating seniors as they continue to build on their successes.”

In addition to recognizing their achievements and contributing to their continuing education, this program also helps Alliance Coal identify and cultivate top talent for the future.

The scholars receiving $1,000 awards are:

The Alliance Coal Teacher Achievement Awards of $500 honor teachers selected by each of the top five scholarship recipients.

“Congratulations to the five teachers selected by our top-ranked scholars. We honor these teachers’ ability to inspire and support students in their studies and contributions to their communities,” said Mackey.

ARLP is a diversified natural resource company that generates income from coal production and oil and gas mineral interests located in strategic producing regions across the United States.

In addition, ARLP also generates income from a variety of other sources.

News, unit prices, and additional information about ARLP, including filings with the Securities and Exchange Commission (SEC), are available at http://www.ARLP.com. For more information, contact the investor relations department of ARLP at (918) 295-7674 or via email at investorrelations(at)arlp(dot)com.