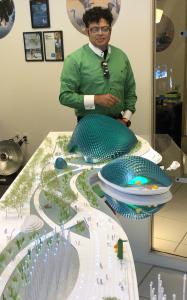 On July 17, 2019, 200 CEOs will gather atop Salesforce Tower, to focus on Climate and Ocean Conservation Living ecotarium being envisioned in San Francisco.

SAN FRANCISCO, CA, UNITED STATES, July 2, 2019 /EINPresswire.com/ — The non-profit (501c3) Aquarium of the Bay is California’s only Smithsonian Affiliate, that has served millions of visitors on Pier #39 for 23 years. This Association of Zoos and Aquariums accredited, award winning institution holds over 23,000 animals in its care in its 750,000 gallon saltwater tanks, including sharks, bat rays, octopus, sturgeons and squids, among others, offering 70,000 children free education each year. An international team of experts is involved in conceiving the BayEcotarium- a living museum- to address the challenges of climate change, ocean acidification, clean energy, carbon-sequestration, sea-level rise, plastic and micro-plastic pollution and solutions- at public policy, programs, prototypes, ocean accelerators and paradigm-shift levels.

Former President of Kiribati, His Excellency Anote Tong, will deliver the Key-Note. President Tong has been at the forefront of raising global awareness on catastrophic risks caused by climate change. His atoll nation faces an existential threat due to rising sea levels owing to Climate Change. He directed Kiribati's purchase of land in Fiji in 2014 as a contingency refuge for his people. Climate warrior Tong, pioneered the notion of ‘migration with dignity’ to prevent his people from becoming ‘climate refugees’. He oversaw the creation of a 480,250 square kilometer marine park, the largest Marine Protected Area in the world winning the Peter Benchley Ocean Award, it was later adopted as a UNESCO World Heritage site. “This gathering of minds In San Francisco is part of a continued process of engagement that strengthens our vision and collective resolve to make this environmental edifice a reality”, says visionary President and CEO, George Jacob, who was recently honored with the Louie Kamookak Medal by the Royal Canadian Geographic Society, and named Chief Advisor to UN Environment on Climate Museum initiatives in the Caribbean Region. Jacob has been working hard with regional institutions and community groups to create a world class destination in San Francisco vital to environmental education, awareness,climate literacy and resilience. The estimated $260 million futuristic living museum inspired by ohlone shell-mounds, iridescent fish scales and ocean geometry, will also yield tremendous impact on the regional economy while creating over 300 jobs in the environment sector.

Suzanne DiBianca, Executive Vice President, Corporate Relations and Chief Impact Officer of Salesforce will welcome the executives from the Bay Area. Suzanne leads Salesforce’s stakeholder strategy, driving positive social and environmental impact across our company, customers, partners and community. She spearheads Salesforce's sustainability efforts to address the urgency of climate change with bold leadership; champions workforce innovation to accelerate training and hiring of the military community; and closely collaborates with Salesforce Ventures to invest in diverse, world-class entrepreneurs who are solving some of the world's greatest challenges across education and workforce development, equality, sustainability, and the social sector through our Impact Fund.

____________________
Bay.Org/ Bay Ecotarium
Our mission is enabling conversations on climate resilience and ocean conservation globally, while inspiring actionable change locally by protection and preservation of the San Francisco Bay and its ecosystems, from Sierra to the Sea™.