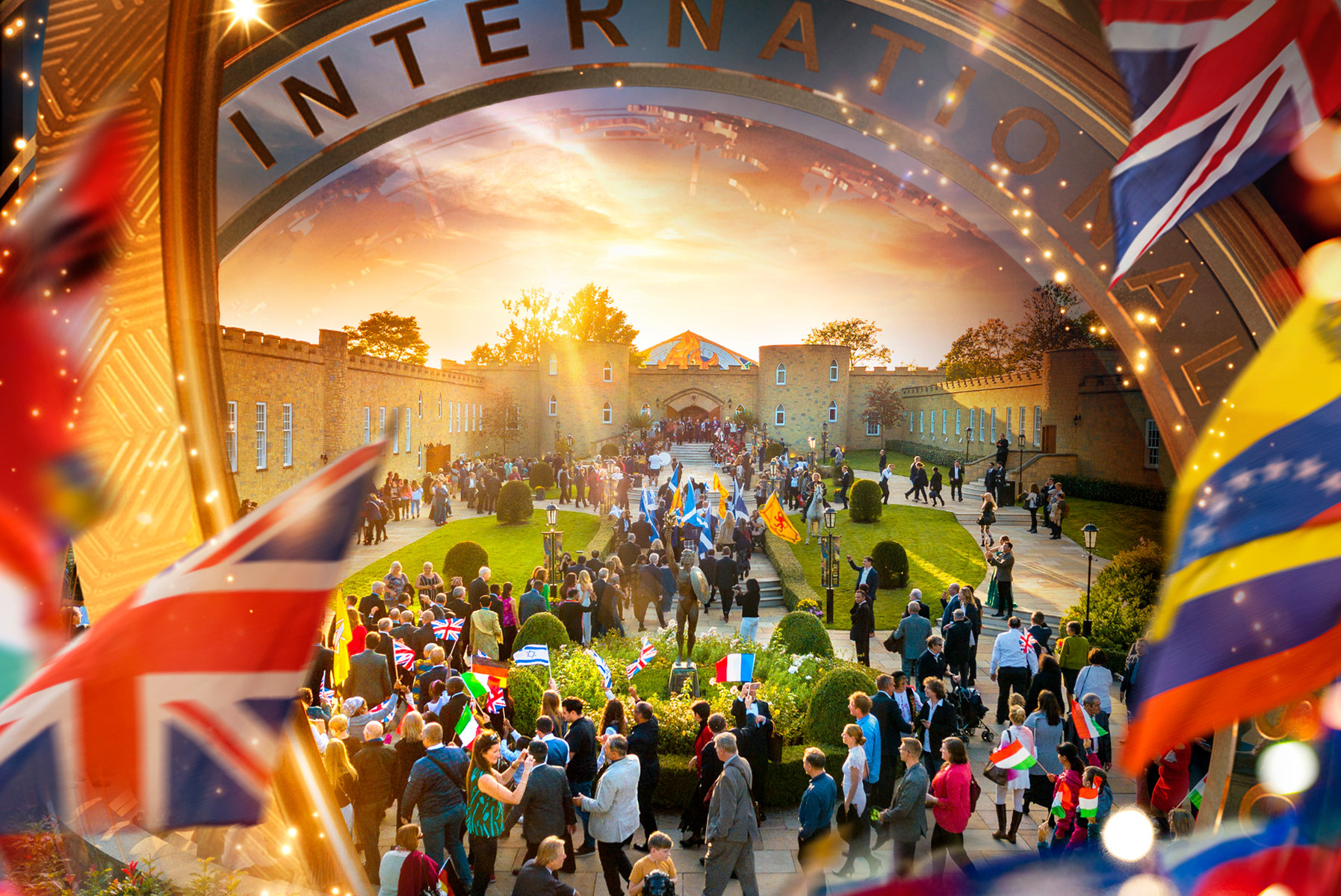 The 34th annual celebration of the International Association of Scientologists (IAS) fits a year of historic heights into three days of delight in Southern England.

EAST GRINSTEAD, England, October 9, 2018 – The town of East Grinstead appears as if from a storybook, a medieval marketplace in the northeast corner of West Sussex—south of London, north of Brighton, lush with farmland, trees, and botanical gardens. It is, after all, a town whose name means “green place,” and borders a nationally recognized Area of Natural Beauty (AONB) that includes the Ashdown Forest of ancient lore.

The destination is off the beaten path, just enough to be blissfully tranquil, but still within hopping distance of Piccadilly Circus. So it was a train of lights flowed through the twisting country roads and arrived at the grand gates, pouring forth wave upon wave of attendees, their anticipation abounding.

This is Saint Hill Manor, home of Scientology Founder L. Ron Hubbard, and once again center stage for the annual gathering of the International Association of Scientologists. The weekend-long gala is an opportunity for parishioners from all corners of England and more than 65 nations the world over to celebrate humanitarian purpose and accomplishment. And as the crunch of stone and gravel below boots and high heels echoed down the drive, dusk turned to night and an evening of wonder was now poised to begin.

Our bid to rid this world of drug abuse, our human rights mandate, and the same again for morality as promulgated by the 21 precepts of The Way to Happiness. The point being, do you honestly believe that history must always rhyme with misery? And that conflict and injustice are inevitable? Well, L. Ron Hubbard never thought so and nor does the IAS.

Chairman of the Board Religious Technology Center

“As is traditional, tonight’s the night we traverse 24-thousand miles of our IAS country and thereby track every vector of planetary salvage,” began Mr. David Miscavige, the ecclesiastical leader of the Scientology religion. “Our bid to rid this world of drug abuse, our human rights mandate, and the same again for morality as promulgated by the 21 precepts of The Way to Happiness. The point being, do you honestly believe that history must always rhyme with misery? And that conflict and injustice are inevitable? Well, L. Ron Hubbard never thought so and nor does the IAS.”

Indeed, the IAS began in 1984, and was founded at Saint Hill to unite, advance, support and protect Scientologists and the Scientology religion so as to achieve the Aims of Scientology. In honor of that tradition, this year Mr. Miscavige outlined a year of outstanding successes powered by an irrepressible force where all advances are aligned toward humanitarian salvage and expansion.

Chief among those successes was the historic grand opening of a stunning new Church of Scientology in Stuttgart, Germany. At the beginning of September, a ribbon fell on the 78,000-square-foot facility in the center of the industrial capital. Attendees of Friday evening’s anniversary celebration in East Grinstead were presented highlights of the dedication ceremony, featuring captivating speeches of dignitaries honoring the occasion as monumental for the past, present and future of not only Germany but all of Europe.

The night continued on an upward trajectory, soaring over a landscape filled with humanitarian accomplishment over the past 12 months and courtesy of the legendary IAS-sponsored initiatives. All began with life-saving efforts to eradicate abuses in the field of mental health through the Citizens Commission on Human Rights.

Miraculous accounts of help, support and human brotherhood, further showcased Foundation for a Drug-Free World, and its never-ending drive to deliver The Truth About Drugs; United for Human Rights, championing the fact that all men, women and children are protected by the Universal Declaration of Human Rights;  The Way to Happiness, the worldwide phenomenon containing the non-religious moral code written by L. Ron Hubbard restoring basic decency and trust in Mankind; and the unrelenting wave of Scientology Volunteer Minister support providing assistance at 19 different calamitous locations in the past year.

This year’s recipients of the three IAS Freedom Medals stood tall, underscoring the evening’s theme of relentless devotion toward the achievement of peace, education, decency, social justice and a drug-free and crime-free existence across the planet. Mr. Miscavige introduced each one individually, and a special video presentation punctuated their unflinching commitment to humanity:

At which point, a night packed full with purpose and passion hit maximum volume as Mr. Miscavige previewed the Scientology Network’s bold new chapter with the announcement of the Fall Season premiere, Monday, October 8. Dozens of new episodes will showcase every aspect of the world’s youngest major religion and its global humanitarian mission over the coming months. In fact, since launch on March 12, 2018, the Scientology Network has been viewed across 237 countries and territories worldwide in 17 languages.

The spirit of the first night’s festivities rolled right on over into Saturday evening as the grand marquee transformed into the annual IAS Patrons Ball. The traditional black-tie dinner and entertainment gala recognized ever-expanding numbers of members supporting the year’s humanitarian triumphs as revelers filled the dance floor into the evening.

The weekend concluded with the annual Charity Concert, a joyous musical event welcoming some 1,500 local residents. The concert featured TV and recording stars, internationally known performers and various music genres from swing to jazz. But the true superstars of the evening were the five local charities awarded donations to strengthen their local activities, in keeping with the tradition first instilled by L. Ron Hubbard, here at his home.

The IAS, the official membership organization of Scientology, open to all Scientologists from every nation, was formed in 1984. The purpose of the IAS is to unite, advance, support and protect the Scientology religion and Scientologists in all parts of the world so as to achieve the Aims of Scientology as originated by L. Ron Hubbard: “A civilization without insanity, without criminals and without war, where the able can prosper and honest beings can have rights, and where Man is free to rise to greater heights.”

Read the article on the Scientology Newsroom.