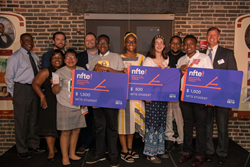 The students pitched their business ideas to a panel of expert judges, competing for cash prizes and a free trip to New York City to represent the Baltimore region in national competition this fall. The first and second place winners now qualify to enter the quarterfinal rounds of NFTE’s National Youth Entrepreneurship Challenge, where they'll compete against top young entrepreneurs from across the U.S. and vie for a chance to win more seed capital to grow their businesses or pursue educational goals.

The results of the 2019 NFTE Baltimore Metro Youth Entrepreneurship Challenge:

Student business pitches were judged by a panel of experts that included:

The evening event was emceed by Keenen Geeter, Founder & Director of Young Men with POWER and a member of the NFTE Baltimore Metro Advisory Board.

Two special awards were announced during the program:

The 2019 NFTE Baltimore Metro Youth Entrepreneurship Challenge was presented by EY and Microsoft.

About NFTE
NFTE is the leading educational nonprofit focused on teaching startup skills and activating the entrepreneurial mindset in young people from under-resourced communities. Research shows the entrepreneurial mindset—skills including problem-solving, adaptability, initiative, and self-reliance—leads to lifelong success. Equipped with the business and academic skills NFTE teaches and empowered by the entrepreneurial mindset, NFTE alumni are prepared to thrive. NFTE works with schools and community partners across the country through its nationwide network of program offices. Alliances with global youth development organizations bring NFTE programs to additional students internationally. NFTE reaches more than 100,000 young people annually and has served well over a million students since its founding. Learn more at nfte.com.