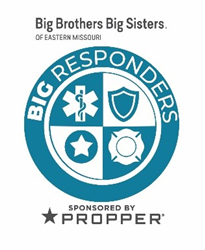 Propper is honored to be a signature sponsor of the Big Responders program. This is one more way to continue serving those who serve.

Big Brothers Big Sisters of Eastern Missouri (BBBSEMO), a nationally-recognized leader in youth mentorship programs, today announced its launch of Big Responders, a new recruitment initiative aimed at adding first-response professionals to its ranks of one-to-one youth mentors. Powered by partnerships with departments and agencies throughout the St. Louis region, Big Responders will focus on reaching firefighters, paramedics, law enforcement officers, and other emergency responders ready to support community both in and out of uniform.

President and CEO, Rebecca (Becky) J. Hatter says this new initiative expands an existing BBBSEMO“original” called Bigs In Blue, a program adopted by Big Brothers Big Sisters affiliates across the country in 2016. By encompassing all first responders, Hatter says that “Big Responders will allow us to recruit more mentors, creating more meaningful relationships between young people and community, and open up the possibility for more unique experiences.”

“It is important to partner with great influencers like these,” says Robinson, “because they are advocates for BBBS who understand community, especially the children, and can empower others to become who they want to be in life.”

Like all mentoring programs supported by Big Brothers Big Sisters of Eastern Missouri, Big Responders aims to ensure that children and teenagers grow up with love, hope, and opportunity. To fulfill this vision, young people must be surrounded by caring and consistent adults. The first several months’ goal for the Big Responders recruitment campaign is recruiting 15 new first responders by the end of 2019 to serve as one-to-one mentors to youth in their service communities.

The Big Responders initiative maintains BBBSEMO’s commitment to young people with hopes of deepening relationships between first responders and the community members they serve. According to Hatter, “There is no program that really changes the hearts and minds of individuals; it is relationships that change lives.”

Big Brothers Big Sisters appreciates the ongoing support of the community, which enables it to grow its services to children. The agency gives special thanks to the new initiative’s Signature Sponsor, Propper.

“Propper is honored to be a signature sponsor of the Big Responders program,” said John Negrau, Vice President of Marketing & eCommerce for Propper. “This is one more way to continue serving those who serve.”

Propper has made tactical gear with a purpose for over 50 years, since their first U.S. Navy contract in 1967. Today, Propper designs and manufactures professional level tactical apparel and gear for military, law enforcement, public safety professionals, and civilians whether they’re in the service, on the job, or off for the weekend.