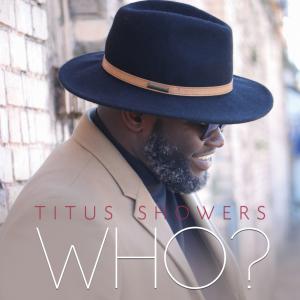 ATLANTA, GEORGIA, UNITED STATES, May 25, 2019 /EINPresswire.com/ — Louisiana-based singer, songwriter, and philanthropist Titus Showers – lead singer of chart-topping sibling group The Showers solo freshman EP 'WHO?' (A&P/UAMG/Sony/Orchard/New Day) has become the highest album sales debut by a gospel artist and the highest sales and charting debut by a new artist this year-to-date. WHO? debuted at No. 1 on Billboard consumption-based Top Album genre chart, No.1 on Nielsen Top Album genre chart and appeared on the prestigious The Emerging Artists chart (which ranks the most popular developing artists of the week, using the same formula as the all-encompassing Billboard Artist 100, which measures artist activity across multiple Billboard charts, including the Billboard Hot 100, Billboard 200 and the Social 50). Additionally, the 7-track EP debuted in the Top 5 on Billboard Top Christian/Gospel Albums, Top 10 on Billboard Top Independent Albums, and Top 40 on the all-genre Top Albums chart.

In addition to his musical success, Titus recently announced his partnership with Forbes Listed Top 25 U.S. charity, MAP International, a global Christian health and relief organization. Titus will serve as a global ambassador advocating for community health development, disease prevention, and eradication, and relief and rehabilitation by helping provide life-changing medicines and health supplies to all people across the world, regardless of religion, gender, race, nationality, or ethnic background who are living in conditions of poverty.

'WHO?' is available now in retail stores and on all digital platforms for download and streaming: http://smarturl.it/tshowerswho.

About Titus Showers: Louisiana-based singer, songwriter, and philanthropist Titus Showers is the lead singer of the chart-topping sibling group, The Showers. He recorded two albums with the family band, 2015's The Showers Family Group and 2017's The Journey – both nominated for Stellar Awards in 2016 and 2018. Titus released his debut radio single in April 2019 and cracked the Top 10 on Billboard Gospel Digital Song Sales chart landing at No.7 ahead of his debut EP WHO? which released on May 10, 2019, debuting at No.1 on Billboard Top Gospel Albums, No.1 on Nielsen Soundscan Top Gospel Albums, Top 10 on Billboard Top Independent Albums, Top 20 on Billboard Emerging Artist chart, and Top 40 on Billboard all-genre Top Albums chart. WHO? is currently the highest album sales debut by any gospel artist and the highest album sales and charting debut by any new gospel artist this year-to-date. Titus is also a global ambassador for Forbes Listed Top 25 U.S. charity, MAP International – a global Christian health and relief organization that provides life-changing medicines and health supplies to all people across the world, regardless of religion, gender, race, nationality, or ethnic background who are living in conditions of poverty.