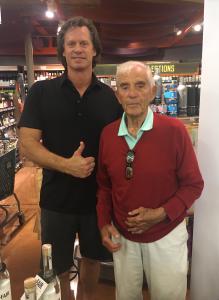 He told Brady Bunte that he couldn’t believe 75 years had passed since the Normandy invasion.”

Brady Bunte says that it was a great honor it was to meet Mr. Bernie Trifoso a World War II Veteran / D-Day survivor. At age 95, a Laguna Niguel, California resident, and just 10 days ago marked the 75th anniversary of D-Day World War II and Bernie is one of the last survivors who served not only in this historical war but 2 more following it. He is sharp as a tack and carries a smart phone that he took out and took pictures of himself and Brady Bunte.

For Bernie and many in his generation, wartime memories have been locked away for many years and few soldiers ever talk about it, but a few years ago Bernie started sharing his wartime experience and the stories began to spill out.

D-Day marks one of the most famous military actions in history and is widely credited with ending World War II.

At 19 years of age Bernie enlisted in the Coast Guard. Service to the country was something that came natural for his family, all of his brothers served in World War II and miraculously all four retuned home safely. He attended Columbia University and Bernie has shown great patriotism for his county. He told Brady Bunte that he couldn’t believe 75 years had passed since the Normandy invasion. “It seemed like it was yesterday” Trifoso said.

Bernie earned 2 bronze stars for bravery and is proud to have served his country. And he spoke lovingly of taking his wife back to Normandy to share his wartime memories. Sadly, today she has Alzheimer's and was not there when we interviewed him. He calls her “the love of his life.”
Trifoso asked that we remember those “who bravely sacrificed so that we could enjoy our lives.” By Brady Bunte.