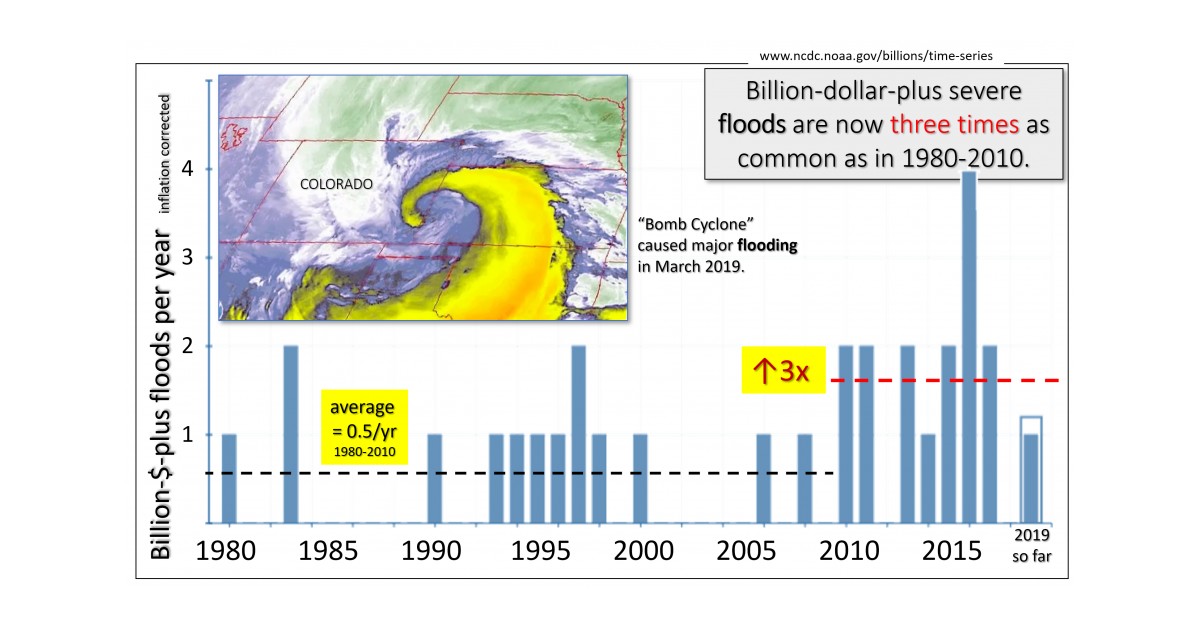 SEATTLE, July 9, 2019 – ​Making the headlines is another rainstorm that slowed in its tracks. Besides flooding many roads in the D.C. area, it managed to flood the basement of the White House. Its 3.3 inches in a single hour is the most ever measured in D.C. Had it kept moving, that rain would have spread out over Virginia.

Monday’s flash flood may not join NOAA’s “Billion-Dollar Disaster” club for severe inland floods but, says Dr. William H. Calvin, the president of the CO2 Foundation in Seattle, it shares the same stall mechanism as most of the new extreme weather. “Hurricane Harvey in 2017, for example, would have passed over Houston in five hours if not for a jet-stream blocking event. It lingered for five days instead, 24 times longer, dumping a year’s worth of rain atop all of the storm surge.” Last year, a downpour kept dumping rain on southern Japan for more than two weeks. In D.C., it stuck around all morning.

It is not only the number of billion-dollar floods each year, he says, but a similar jump in severity or numbers can be seen for four other types of extreme weather as well. Most are worse than triple. “Severe windstorms are now eight times as common as they used to be before 2003. To judge from firefighting costs, ‘fire weather’ tripled in 2000. Now, it is four times the 1990s numbers.” Then there are the mega heat waves in Europe in 2003 and in Russia in 2010 that each killed about 100 times more people in a week than did 20th-century heat waves. “Most share a common mechanism: weather stalled by a long jet-stream meander.”

“In retrospect,” he says, “we had an abrupt climate shift back then. Climate change was not gradual, the way we had assumed it would be. Starting 50 years ago, we were repeatedly warned that extreme weather would get worse. It is pretty clear what is behind it: the cumulative effects of the rapid Arctic warming that began in 1993, producing more of those troublesome jet-stream loops. The Arctic has a vicious cycle we must break. It responds to warmer by absorbing even more warmth. Then, half a world away, minor problems become major problems.”

William H. Calvin, Ph.D., is an emeritus professor at the University of Washington School of Medicine in Seattle and the author of Global Fever. He is also the president of CO2Foundation.org, which is busy trying to educate policymakers and the public about extreme weather threats and the need to quickly draw down the 45 percent excess of CO2 overhead.

His email is [email protected].

The billion-$ data is curated at www.ncdc.noaa.gov/billions/time-series.