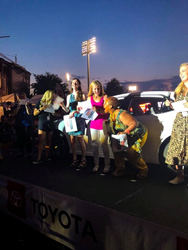 Teachers react to the surprise reveal that all of them are winning cars, courtesy of Circle K

When Circle K and Coca-Cola Consolidated kicked off their campaign to celebrate local teachers earlier this year, they promised to select one teacher to win a new 2019 Toyota Camry. On Saturday, the final night of Circle K Speed Street presented by Coca-Cola, Circle K surprised the teachers and the crowd by giving away not just one Toyota Camry, but three.

“Circle K is an international company that believes wholeheartedly in the local communities and people we serve,” said Misti Mason, senior marketing manager at Circle K Southeast. “We are in awe of people like our Charlotte area teachers who give to our students and our communities; this contest is really about honoring them and their personal commitments and acts of service to our kids.”

Here’s what the teachers had to say:

“This is overwhelming. I don't know how to describe it. I teach my students every day that the role you play in life is more important than the role you play on stage, and this is a perfect example of that.” — Lillian Allemond, Hopewell High School

“I am just truly blessed. It’s a wonderful, wonderful feeling knowing that you are supported by your parent, your students and your administration.” — Victoria Berke, Ardrey Kell High School

“As a teacher, I always want to live a life that's an example for my students, and for my students to see this, I hope it's the moment that inspires them to keep dreaming and putting their best foot forward; tonight was both the lesson and blessing that they can have this, as well.” — Natalie Harrell, South Mecklenburg High School

Circle K and Coca-Cola Consolidated kicked off the contest earlier this year, asking students and parents within the CMS district to nominate a deserving high school teacher for a chance to win a new 2019 Toyota Camry. More than 1,000 nominations poured in, and the Circle K team narrowed the list down to the top 20. On Saturday night, they all took the stage to be recognized, and Coca-Cola awarded each of them $500 to refresh their classrooms.

“Charlotte teachers inspire and support our children every day without question, and they give so much of themselves to do that,” said Christi McGee, vice president of community advocacy at Coca-Cola Consolidated. “As Charlotte’s local bottler, Coca-Cola Consolidated is honored to support our teachers through our BIG HEARTS. mini cans. program because we truly see them as heroes for our community.”

This is the second year the teacher giveaway has been part of Circle K Speed Street presented by Coca-Cola, which is produced by the 600 Festival.

This year’s giveaway was one of many memorable moments throughout the festival, which has commemorated the May races at Charlotte Motor Speedway for 25 years.

Here's a look at the last three days of experiences by the numbers:

·     2,500 lug nuts changed at The Tire Change Challenge powered by the Xcalibur Pit School at the Autograph Zone. (Fastest change times this weekend? 4.58 seconds for a pro; 5.62 seconds for a fan.)

·     1,000 pictures snapped in the photo booth at Circle K’s “Take It Easy Tailgate”, where fans could also play a round of cornhole or shoot some hoops.

Circle K Speed Street presented by Coca Cola has been promoted and produced exclusively by CSM Production since 1996. For more information on all five 2019 600 Festival Association events, visit http://www.600festival.com or follow us on Facebook and Instagram.