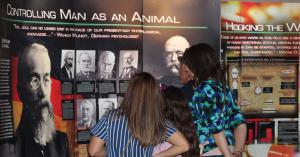 Visitors study one of the displays at the Psychiatry: An Industry of Death Exhibit

The Citizens Commission on Human Rights brings traveling exhibit to Sacramento to warn parents of sharp increase in psychiatric drugging of infants & toddlers.

SACRAMENTO, CALIFORNIA, UNITED STATES, July 6, 2019 /EINPresswire.com/ — Alarmed by the fact that more than 1 million 0-5 year olds in the U.S. are prescribed psychiatric drugs, the Citizens Commission on Human Rights (CCHR) of Sacramento took their message directly to local parents. CCHR, a non-profit, non-political, non-religious mental health watchdog group, brought its traveling exhibit to Old Sacramento over the 4th of July weekend with the aim of warning thousands of parents about the dangers of these drugs.

The exhibit, “Psychiatry: An Industry of Death” provides extensive documentaries that highlight psychiatric violations of Human Rights done under the guise of help.

“It is especially appropriate to host the exhibit this weekend when we contemplate and celebrate our freedoms in this country and renew our commitment to preserve them,” said Jim Van Hill, Executive Director of Sacramento’s CCHR chapter. “The increase in drugging of toddlers and even infants, is extremely dangerous and is just one of psychiatry’s violations of Human Rights.”

Despite the fact that psychiatric drugs are so powerful that they carry over 380 international drug regulatory warnings, IMS Institute for Healthcare Informatics, reported that 274,804 babies, 370,778 toddlers and 500,948 preschoolers have been prescribed them in the U.S. The report also found that 1,400 infants were on ADHD drugs.[1]

This sharp increase is incomprehensible given the lack of evidence that they are even remotely safe for this age group. Dr. Thomas Insel, director of the National Institute of Mental Health stated, “There are not any good scientific data to support the widespread use of these medicines in children, particularly in young children where the scientific data are even more scarce.” [2]

The drugs being prescribed to children include ADHD drugs, antidepressants, antipsychotics and anti-anxiety drugs. They have been known to cause serious adverse effects such as heart problems, psychosis, death, suicide attempts, cardiovascular problems, and addiction. This is just a small sampling of the serious effects these drugs can have.[3]

Claudia M. Gold, M.D. believes the appropriate approach to raising children who are encountering difficulties is to parent them, not to drug them.

Dr. Gold said “Mental Health Disorder are big words to put on a small person… Based on my years of clinical experience as a pediatrician, together with evidence offered by contemporary research in developmental psychology, genetics and neuroscience, I believe that supporting parents’ efforts to understand their young child’s experience of the world, to help him or her to make sense of whatever particular vulnerabilities he or she has, without labelling him or her with a disorder, is a better approach.”[4]

Children have never been diagnosed and drugged at the rate they are now and society did fine in raising its children. Why are psychiatrists and doctors suddenly insisting that old-fashioned parenting is insufficient? Especially since no “medical” or scientific test exists that proves any child has a “mental disorder” or “mental illness.” In fact, the tests are subjective and based on a checklist of symptoms.[5]

According to Dr. Thomas Dorman, and many other physicians, the reason is a morally bankrupt strategy that the psychiatric industry is using to line its pockets with insurance payouts.

“In short, the whole business of creating psychiatric categories of ‘disease,’ formalizing them with consensus, and subsequently ascribing diagnostic codes to them, which in turn leads to their use for insurance billing, is nothing but an extended racket furnishing psychiatry a pseudo-scientific aura. The perpetrators are, of course, feeding at the public trough,” stated Dr. Thomas Dorman, internist and member of the Royal College of Physicians of the UK, Fellow, Royal College of Physicians of Canada. [6]

“This harmful drugging of children is criminal,” Van Hill said. “What better time than the 4th of July to make people aware of this threat to their children’s freedom and the future of our country. Let’s work together to start regulating psychiatry and develop saner, safer approaches to mental health.”

CCHR was co-founded in 1969 by the Church of Scientology and Professor of Psychiatry Emeritus Dr. Thomas Szasz at a time when patients were being warehoused in institutions and stripped of all constitutional, civil and human rights. For more Information you can visit them at their website at; https://www.cchr.org/

[5] “The Difference between a medical diagnosis and a psychiatric diagnosis,” https://www.cchrint.org/psychiatric-disorders/psychiatristsphysicians-on-lack-of-any-medicalscientific-tests/