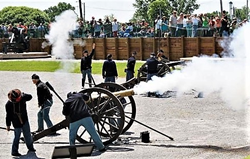 Civil War re-enactors will conduct weapons and artillery demonstrations during the DCC’s July 4 commemoration of the Battle of Helena.

Fort Curtis was one of five fortified positions which enabled 4,29 Union soldiers to repulse an attack by 7,646 Confederate soldiers during the Battle of Helena on July 4, 1863.

On Thursday, July 4, the Delta Cultural Center (DCC) will host a weapons and artillery demonstration to commemorate the July 4, 1863 Civil War battle of Helena. Civil War period re-enactors will muster at Fort Curtis from 9 a.m. to 12 p.m., to begin this special event. Fort Curtis is located at 350 Columbia Street, in historic downtown Helena. The event is open to the public and free of charge.

Fort Curtis, named for the Union general in command, was one of five fortified positions which enabled Union soldiers to repulse a Confederate attack on July 4, 1863. On the day of the attack 4,129 Union officers and soldiers were positioned in and around the fort against 7,646 Confederate troops under General Holmes. The original Fort Curtis was a major Union fortification during and immediately after the Civil War.

The July 4 reenactment will take place in Helena’s 3/4 scale replica of the original fort. The public will be able to experience an earthen fort firsthand, including the huge 24-pounder cannons. Re-enactors will offer visitors the opportunity to learn more about the lifestyles of Civil War soldiers who fought at the Battle of Helena.

Civil War re-enactors will conduct weapons and artillery demonstrations during the DCC’s July 4 commemoration of the 1863 Civil War Battle of Helena.