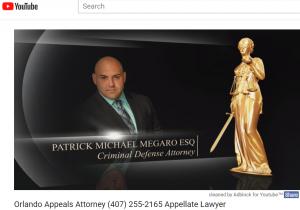 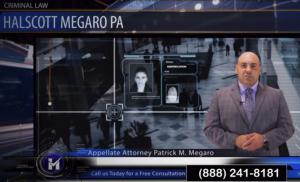 Court of Appeals largely agreed with the arguments of Lawyer Patrick Megaro, that the police officer had no good reason (“probable cause”) to stop driver

… we support the police who are dedicated public servants sworn to protect public safety. For that we are truly grateful. However, everybody, even police officers, must follow the law.”

ORLANDO, FLORIDA, UNITED STATES, August 19, 2018 /EINPresswire.com/ — Attorney Patrick Megaro prevailed on appeal in a case where a police officer stopped the vehicle of Mr. E.L. without justification. The Law Firm of Halscott Megaro PA announced that the U.S. Court of Appeals for the Eleventh Circuit largely agreed with the arguments of Mr. Megaro, that the police officer had no good reason (“probable cause”) to stop E.L. The opinion of the three judges of the Court was unanimous (“per curiam”).

The underlying criminal case arose out of a traffic stop. According to the police officer’s testimony, E.L. was driving somewhat erratically, including multiple lane changes. When the officer stopped E.L., the testimony whether E.L. appeared intoxicated was contradictory.

The officer arrested E.L. for violating the Traffic Control Devices (changing lanes); for the violation Required Position and Method of Turning at Intersections (for turning into a middle lane instead of the nearest available lane); and finally, for Driving Under the Influence (DUI).

On behalf of his client, Megaro filed a 42 U.S.C. §1983 action (civil rights violations), claiming that this was a false arrest. In the trial court, the judge granted the police officer qualified immunity and thus summary judgment (a decision on the pleadings, without a formal trial).

Attorney Patrick Megaro appealed, and the Court agreed with the key arguments. On the issue of the multiple lane changes, the Court found that the applicable law does not prohibit such multiple lane changes, and it seems there were no solid yellow lane lines or solid double white lane lines. Thus, E.L.’s lane changes do not create a reason to arrest him. As to E.L.’s left turn into the middle instead of the nearest available lane, again the applicable law does not require that the turn be made to the extreme left hand lane lawfully available. There, based on the available information, the police officer did not have probable cause to stop and then arrest E.L.

Attorney Patrick Megaro comments: “First, let me say that we support the police who are dedicated public servants sworn to protect public safety. For that we are truly grateful. However, everybody, even police officers, must follow the law. We applaud the Court’s ruling that no reasonable police officer could have believed that my client’s conduct at the time of the stop was DUI.”

Mr. Megaro notes in particular that the police officer was “not entitled to qualified immunity on the false arrest claim …. because … no reasonable police officer could have believed that [E.L.]’s conduct at the time of the stop constituted driving under the influence.”

The Court sent the case back to the trial court for a proceeding on the false arrest claim.

Mr. Megaro is a native of New York where he played Division I college football and rugby at Hofstra University before graduating from Hofstra Law School. While at Hofstra Law, Mr. Megaro found his calling in life as a litigator and courtroom attorney. In law school, he interned at The Legal Aid Society in Queens, New York City and practiced criminal defense at the Criminal Justice Clinic at Hofstra Law School, representing real clients prior to graduation.