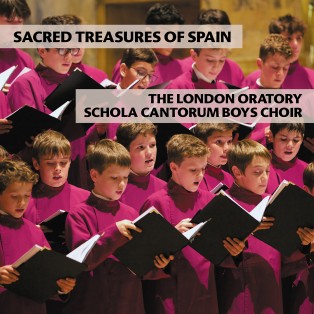 LONDON, June 17, 2019 – ​De Montfort Music/AimHigher Recordings proudly announces the sophomore release from The London Oratory Schola Cantorum Boys Choir, one of three choirs of the world-renowned London Oratory choral program. The new album Sacred Treasures of Spain will be available June 28, 2019, on AimHigher Recordings through her parent distributor De Montfort Music. Sacred Treasures of Spain is the follow up to the critically acclaimed 2017 debut album of the label arrangement, Sacred Treasures of England, which Gramophone called “A bright, joyful grain … with disarming freshness,” and which shot to the top ten of the Classical Billboard Charts in both the U.K. and the U.S.

The Schola Cantorum, which has been featured in a number of major motion pictures, including The Lord of The Rings, presents a gorgeous must-have collection of sacred music from the Spanish renaissance on Sacred Treasures of Spain. The new recording will coincide with a U.S. tour of the West Coast, including singing at three of California's historic Missions.

“The London Oratory Schola Cantorum Boys Choir brings a completely unique repertoire of sacred music to ears and spirits on Sacred Treasures of Spain,” said De Montfort/AimHigher Co-founder Monica Fitzgibbons. “On the heels of the sublime Sacred Treasures of England, we could not be more enthused to release this extraordinary collection for music fans everywhere to enjoy.”

Charles Cole, Director of the Schola, had this to say of their latest offering, “We are delighted to release this new recording of beautiful Spanish motets drawn from the repertory, which we sing at the London Oratory. Sixteenth century Spain, known as the Siglo de Oro, truly was a golden era during which a number of outstanding composers crafted their most beautiful work, adding to the treasury of great renaissance polyphony.”

The Schola was founded in 1996. Educated in the Junior House of the London Oratory School, boys from the age of 7 are given outstanding choral and instrumental training within a stimulating musical environment.   Directed by Charles Cole, the prestigious Schola is regarded as one of London’s leading boy-choirs, in demand for concert and soundtrack work. The London Oratory Schola Cantorum Boys Choir will be the first choir to release an album under a new international recording partnership with AimHigher Recordings/Sony Classical. For more information, visit: www.londonoratoryschola.com/.