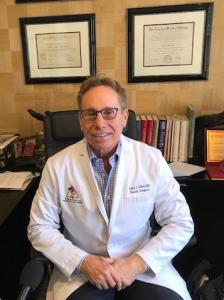 “We're honored to include Dr. Gary Alter into our BoLAA family.” ~Aurora DeRose

“With all of Gary Alter’s incredible achievements in the field of medicine, it’s easy to see why he has earned a place on L.A.’s 100 Most Fascinating People list” said DeRose.

The “Best of Los Angeles Award” community was formed four years ago and consists of over 5,300 professional members living and working in Southern California. It celebrates the best people, places and things in Los Angeles with a slogan “No Ads. No B.S. Only the Best.”

“The mission of the community is to celebrate the best of Los Angeles, and allow its community members to connect with other members who share the highest standards of quality and integrity,” expresses DeRose. “We're honored to include Dr. Gary Alter into our L.A.’s 100 most Fascinating List.”

Alter was one of the first physicians with Board Certification by both the American Board of Plastic Surgery and the American Board of Urology. He is an Assistant Clinical Professor of Plastic Surgery at UCLA School of Medicine. Alter's sub-specialty is in genital plastic surgery, especially genital reconstruction. He has invented many original surgical procedures adopted by other plastic surgeons in the field, including the “Alter Central-Wedge labiaplasty technique”.

He was featured on E! Entertainment's programs Dr. 90210 and Botched. He has been highlighted on Alexis Arquette: She's My Brother (documentary) and on the TLC show Strange Sex, discussing hidden penis syndrome. He has appeared on the Discovery Health Network, TLC, CNN, the Larry King Show, and was a recurrent guest on “Red Eye” on the Fox News Channel. He has also been featured in numerous media outlets including the New York Times, the Los Angeles Times, the Wall Street Journal, USA Today, Allure, Self, Glamour, Marie Claire, Cosmopolitan, and Health.