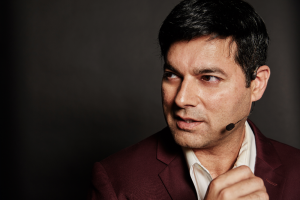 “We're honored to include Dr. Reef Karim into our BoLAA family.” ~Aurora DeRose

“With all of Reef Karim’s incredible achievements in the field of medicine and wellness, it’s easy to see why he has earned a place on L.A.’s 100 Most Fascinating People list” said DeRose.

The “Best of Los Angeles Award” community was formed four years ago and consists of over 5,300 professional members living and working in Southern California. It celebrates the best people, places and things in Los Angeles with a slogan “No Ads. No B.S. Only the Best.”

“The mission of the community is to celebrate the best of Los Angeles, and allow its community members to connect with other members who share the highest standards of quality and integrity,” expresses DeRose. “We're honored to include Dr. Reef Karim into our L.A.’s 100 most Fascinating List.”

Dr. Reef Karim, a leading expert in human behavior, has dedicated his life to educating, entertaining and helping people understand themselves better. He is a double board-certified psychiatrist, addiction medicine physician and relationship expert as well as a writer, host and media personality. He served as an Assistant Clinical Professor at the UCLA Semel Institute for Neuroscience and founded a personal transformation and recovery outpatient treatment center in Beverly Hills for mental health, personal growth, toxic relationships and addiction recovery. (www.lumioncenter.com).

The good doctor is a highly sought-after speaker and is well known in the media with recurring appearances on: Oprah, Dr. Oz, CNN, Larry King Live, Dr Phil, Anderson Cooper 360, Nightline, The Today Show, Chelsea Lately and many others. He hosted the television shows Broken Minds on the Discovery Network, House of Clues on Court TV and Outrageous Acts of Psych on the Science Channel. Dr Reef also writes, produces, and hosts the new online late-night talk show Reef Madness where he breaks down the best and most controversial topics in human behavior.

Reef is the co-author of the dating psychology book “Why Does He Do That? Why Does She Do That?”, his literary work is frequently published in Forbes and Huffington Post and his research on human behavior has been published in many prestigious academic journals including, The International Journal of Neuroscience and The Journal of Addiction Medicine. He has a special interest in American Pain, Fame Addiction and The Neuroscience of the Self (www.fameaddict.com).

Also known as The Sex, Drugs & Relationships Doctor, Dr. Reef is all about self-expression. He believes “Laughter really is the best medicine,” and as such, has studied improvisation for years and performs stand-up at comedy clubs all over Los Angeles. With improv and performance training, he’s had the opportunity to act and consult in both Hollywood and Bollywood movies playing lead and supporting characters and he’s worked as the technical medical advisor on big feature films and television shows including: Private Practice, Alias, Bourne Identity and many others.