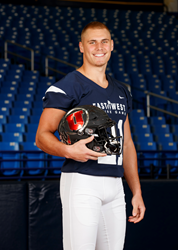 “I am very grateful to receive this award and to everyone who makes it possible,” said Barton. “Pat Tillman was a great leader, a humble man who served others, who stepped away from the spotlight to serve our country. This week was a great experience to reach out to others and touch their lives.”

Each year, the East-West Shrine Game presents the Pat Tillman Award to recognize the player who best exemplifies intelligence, sportsmanship, and service. The award celebrates a student athlete’s achievements and conduct on and off the football field. The 2019 recipient is University of Utah linebacker, Cody Barton.

Throughout his career, Barton has demonstrated a relentless drive and great awareness on the field, frustrating offenses like the man for which the award is named. He registered 92 tackles, including 10.5 for a loss, 3.5 sacks, and an interception over 53 games. His Shrine Game coaches describe him as a true leader who outworked everyone in practices, had a smile on his face the entire week, and understands the true meaning of the Shrine Game with his interactions with the patients at Shriners Hospitals for Children.

“The award is a tribute to the late Pat Tillman, a man who demonstrated to a nation that true service is the willingness to sacrifice one’s own dreams, so that others may continue to pursue theirs,” said Utah defensive coordinator, Morgan Scalley, who earned the first Pat Tillman Award when he played in the 2005 Shrine Game. “Cody’s leadership, work ethic, intelligence, and sacrifice are what we hope every player aspires to demonstrate while at the University of Utah.”

“Pat Tillman’s ideals, strength and convictions made him an American hero, so winning this award is a tremendous honor,” said Utah head coach Kyle Whittingham. “Cody has embodied the values associated with the Pat Tillman Award during his career at Utah and we are proud to have him join Morgan Scalley as a Pat Tillman Award winner.”

Barton started his Shrine Game experience with a visit to Shriners Hospitals for Children-Tampa, where he played with patients on the basketball court, taking photos and signing autographs. He spent the week practicing with his teammates under West head coach Adam Zimmer, linebackers coach for the Minnesota Vikings.

“I am very grateful to receive this award and to everyone who makes it possible,” said Barton. “Pat Tillman was a great leader, a humble man who served others, who stepped away from the spotlight to serve our country. This week was a great experience to reach out to others and touch their lives.”

About the East-West Shrine Game
The East-West Shrine Game is the longest-running college all-star football game in the country and features some of the highest-rated players in the projected NFL draft ranking. While the teams are divided by East and West, the players come together for the beneficiary of the event, Shriners Hospitals for Children. For more information, visit http://www.shrinegame.com.