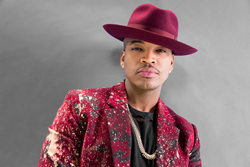 Face Forward announces that the featured performer at their “La Dolce Vita” themed Gala will be Grammy winning artist NE-YO this September 22, at the Beverly Wilshire Hotel. In celebration of the organizations’ 10-year anniversary, Face Forward hopes to raise over a million dollars to support even more survivors from around the world.

“We are so excited that NE-YO will be performing at this year’s gala! He is a great fit for our mission and the La Dolce Vita them,” said CEO/Founder Deborah Alessi. “I am confident this will be our best gala yet. With about eighty percent of our patient funding coming from our gala each year, celebrating our tenth anniversary means we have to make it extra special to help raise more money for surgeries than we ever have. This year in particular, we have more international survivors from places like Kenya, Sudan, Honduras, India and the UK who will be coming for treatment; every dollar raised helps us change lives….one survivor at a time.”

The Beverly Hills based non-profit organization celebrates 10 years of providing reconstructive surgery and emotional support for women, children and men who have been victims of domestic violence, human trafficking, or any cruel acts of crime. The Face Forward Annual Gala will raise funds that directly support patient treatment and recoveries, airfare, accommodations, and all necessary medical expenses for survivors. Founder of Face Forward and domestic violence survivor, Deborah Alessi, along with her Co-founder and husband, Dr. David Alessi M.D., Beverly Hills renowned facial reconstructive surgeon, have provided millions of dollars in donated surgical and counseling services to nearly 80 patients from 10 different countries around the globe over multiple years of treatment, some requiring up to ten or more surgeries each. In addition to the hundreds of surgeries that have been provided in direct services, through strategic partnerships with other nonprofit organizations and their own Patient Advocacy Board, Face Forward has also connected thousands more survivors with educational and counseling services, legal and employment referrals as well as educational scholarship opportunities. In recognition of their work, Face Forward was recently recognized by The Mary Byron Project with the “Celebrating Solutions Award” for fostering innovations and strategies to help end domestic violence.

Additionally, in 2018, Face Forward treated their first transgender survivor who was a victim of sex trafficking, and also assisted with Syrian refugee children traveling to the US for treatment.

About Face Forward
Since Face Forward’s inception in 2007, the organization has worked with community leaders around the world to identify victims of violence who are working toward recovery, yet carry the burdening physical evidence of past abuse. Face Forward does more than just provide pro bono reconstructive surgery to adults and children who have suffered traumatic and severe physical abuse; they also create a welcoming and safe environment for these survivors to start a fresh new life, and reclaim their confidence. The organization co-founders Mrs. Deborah and Dr. David Alessi both donate their time and skills 100% to the organization to provide Face Forward patients with the necessary surgeries and counseling services. Face Forward is a 501(c)(3) non-profit organization, and funds raised by the organization help with ancillary costs, travel expenses for patients including airfare, accommodations, transportation, nursing aftercare and more. For more information go to http://www.faceforwardla.org/.

NE-YO: NE-YO’s first single, 2005’s “So Sick,” hit No. 1 on the Billboard Hot 100, and was certified quadruple Platinum. Since then, he has racked up a collection of hit singles – including “Sexy Love,” “Closer,” “Because of You” and “Miss Independent” – and three of his albums have entered SoundScan’s Top Current Albums chart at No. 1. NE-YO, who has won three GRAMMY® awards and received 14 nominations, has proven to be as powerful with his pen as he is in the recording studio and on stage. The Las Vegas native quickly became known as a go-to hitmaker, penning bangers like Rihanna’s “Unfaithful,” “Russian Roulette,” and “Take a Bow,” along with Beyoncé’s 2006 breakup anthem “Irreplaceable” and songs for such artists as Jennifer Hudson, Usher, Carrie Underwood, Celine Dion, among others. NE-YO’s film and television credits include “Save the Last Dance,” “Battle: Los Angeles,” “Stomp the Yard,” George Lucas' “Red Tails,” “Empire,” “The Wiz Live!” and “Step Up: High Water.” Currently you can catch NE-YO sitting next to Jennifer Lopez and Derek Hough at the judges table on NBC's hit dance competition show World of Dance. New album Good Man available now.

Jay McGraw is a writer, producer, TV executive producer and son of TV doctor Phil McGraw. McGraw produces the hit tv show The Doctors and has written several books assisting young people. He has appeared on his father's TV show Dr Phil and served as executive producer on several episodes. McGraw is president and CEO of Stage 29 Productions in Los Angeles, a company he co-founded with his father. He appeared as the host of Renovate My Family, which aired on Fox.

Christopher Bollenbach is the CEO of Bottega Louie Restaurant, Gourmet Market and Patisserie in Downtown Los Angeles. He has been a member of the board and an investor in the celebrated restaurant since its founding by his brother, Keat, in 2007. In addition to his work at Face Forward, Bollenbach has worked with a variety philanthropic endeavors including Children's Hospital of Los Angeles and Autism Speaks. Bollenbach dedicates his time to developing the next generation of leaders by working with at-risk high school students at the Academy of Business Leadership. He also served as a chairman for the Bollenbach Family Scholarship Fund – founded by his parents- which, during his tenure, sent over 60 students to college who otherwise could not afford it. Bollenbach currently serves as a trustee for Georgetown Preparatory School, his prep school Alma mater in Washington DC. He resides in Westwood, California with his wife Kendra, a Face Forward board member, and his daughter Anastasia.

About Jeremy Piven: Jeremy Piven was most recently seen as a series regular in the CBS television series WISDOM OF THE CROWD. He was also recently seen as Harry Gordon Selfridge in the popular PBS series MR. SELFRIDGE. Among his many notable roles, Piven is best known as movie agent “Ari Gold” in the hit HBO series ENTOURAGE, which aired for eight seasons and won Piven three Emmy Awards and a Golden Globe. In 2015, Piven reprised the fan-favorite role in the ENTOURAGE feature film released by Warner Bros. He was also seen in SIN CITY: A DAME TO KILL FOR from directors Frank Miller and Robert Rodriguez. Jeremy’s extensive career in television also includes the satirical THE LARRY SANDERS SHOW. In film, he starred in Mark Pellington’s drama I MELT WITH YOU, Gaby Dellal’s heart-wrenching ANGELS CREST, Gary Fleder’s RUNAWAY JURY, Todd Phillips’ hit comedy OLD SCHOOL, Ridley Scott’s BLACK HAWK DOWN, Peter Chelsom’s SERENDIPITY, Brett Ratner’s THE FAMILY MAN, Peter Berg’s VERY BAD THINGS and THE KINGDOM, Cameron Crowe’s SINGLES, Joe Carnahan’s SMOKIN ACES, Guy Ritchie’s ROCKNROLLA, and THE PLAYER for director Robert Altman. In 2005, Piven returned to his theater roots starring in the off-Broadway hit FAT PIG by Neil LaBute, for which he received a Distinguished Performance Honor from the Drama League. He also appeared as Bobby Gould on Broadway in SPEED THE PLOW.