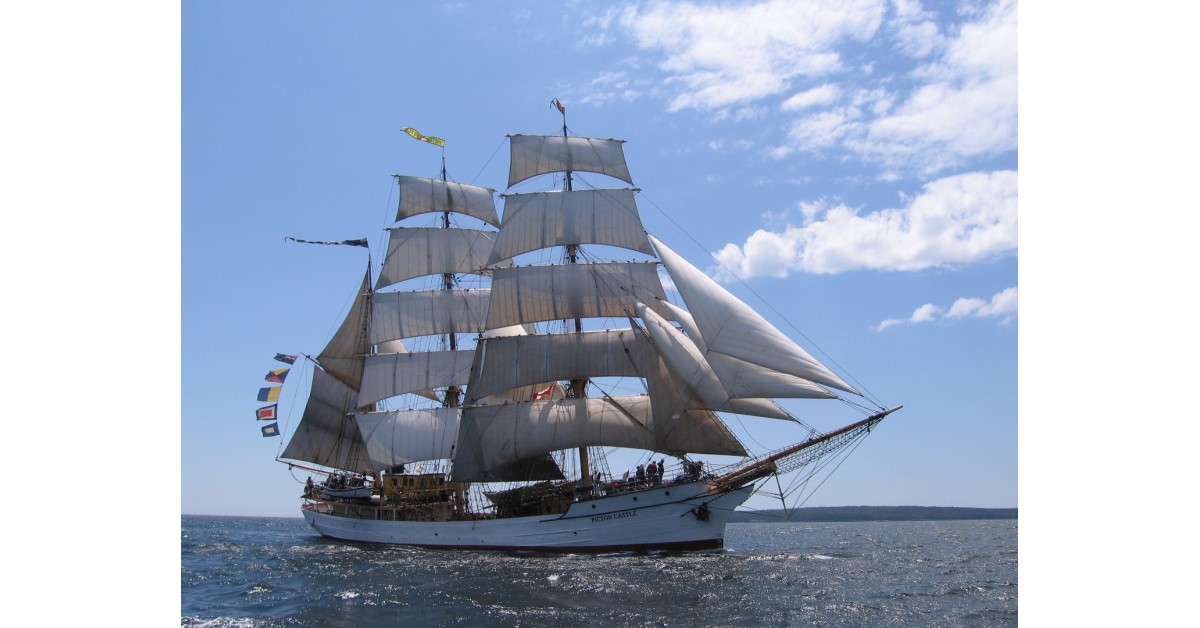 Built in 1928 as a motorized fishing trawler of Wales, the PICTON CASTLE was given its name after the 13th century Pembrokeshire castle located in Wales. Conscripted into the Royal Navy in WWII, the ship became a minesweeper and convoy ship. While minesweeping, a dangerous branch for ships, the PICTON CASTLE lived to tell the tale of a mine exploding just underneath her, lifting the 300-ton ship out of the ocean with little sustained damage. The ship was later hailed the “Liberator of Norway” after harboring just days after the Germans abandoned their post.

After her war service, PICTON CASTLE went back to fishing and carrying cargo around the North Sea, owned by a number of different companies in Norway. She was purchased by Captain Moreland in the early 1990s. He brought her to Lunenburg, Nova Scotia, after spending time in England, Bermuda and New York City’s South Street Seaport Museum. At South Street Seaport Museum, she was being worked on below deck but did not yet have masts, rigging or sails. Her conversion to a tall ship occurred upon her arrival in Lunenburg.

Currently, the 179-foot long ship works as a deep-ocean sail training vessel focusing on long distance education. The ship transports educational supplies to islands in the South Pacific while the ship’s crew experiences all the joys of working at sea, including handling sails, scrubbing the deck, raising the anchor and keeping a lookout. Crew members sail to exotic islands on world voyages while learning to sail this square-rig ship.

The PICTON CASTLE, sponsored by Logistics Plus, will be docked at the Erie Maritime Museum after the Parade of Sail on Thursday, Aug. 22. Tall Ships Erie 2019, presented by Highmark, will take place Aug. 22-25, 2019. The festival will showcase 14 tall ships, deck tours, day sails, live music and entertainment, children’s activities, a festival marketplace, food vendors, a beer garden and much more. To purchase tickets or for more information, go to tallshipserie.org.

Tall Ships America organizes the TALL SHIPS CHALLENGE® annual series of tall ship races and maritime port festivals to celebrate our rich maritime heritage and traditions and to inform the general public about the transformative power of adventure and education under sail®. In 2019, the tall ship races are officially sponsored by Erie Insurance. Based in Erie, Pennsylvania, Erie Insurance is a FORTUNE 500 company offering auto, home, business and life insurance through a network of more than 12,000 local independent ERIE agents.