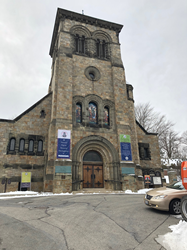 “This iconic landmark, and the story it tells, is truly an authentic part of American history, and a treasure we want to share,” said Governor General George Garmany, GSMD.

A historic 1897 Plymouth, MA church designed as a memorial to the Mayflower Pilgrims and built by famed architects Hartwell, Richardson & Driver is getting a new lease on life. Final papers were submitted to the Plymouth Registry of Deeds on Tuesday, February 19, 2019 making the General Society Mayflower Descendants (GSMD) sole owner of the former First Parish Church of Plymouth.

For the past few years, large white panels have stared down at passersby where Tiffany stained-glass windows once resided. They had to be taken down and stored because the structure could no longer bear the weight of them. Today, at the same time the deed was finalized, photos of the stained-glass windows were installed over the white panels signaling a new day for the deteriorating historic icon. One of the many treasures in the building, all of the stained-glass windows are from Tiffany studios and all have a Mayflower theme. The windows in storage depict pastor John Robinson saying a farewell prayer as the Pilgrims board the Mayflower in Holland.

To save their beloved building, the First Parish Church congregation donated the Meetinghouse to GSMD. The society will make it an education center to tell the Mayflower story. It is operated by the National Pilgrim Memorial Meetinghouse Charitable Trust, an entity of GSMD.

“Our goal is to enlighten the general public about the Mayflower story,” said Lea Filson, President, NPMM Charitable Trust. “Those who visit will be surprised, delighted, and entertained while gaining an understanding of how the Pilgrims introduced civil and religious freedom to America.”

The relationship between GSMD and the Meetinghouse spans generations. When it was first constructed in 1897, a campaign launched by GSMD raised funds to build the Pilgrim memorial from churches across America. The society also funded most of the Pilgrim-related Tiffany windows as well as some furniture in the sanctuary.

For the next year, restoration work will preserve and seal the exterior. GSMD will then begin work on the interior at an additional cost of $8 to $10 million dollars. Once the entire project is complete, it will become a starting point for visitors as they begin a journey of exploration throughout the town of Plymouth. Interactive programs, films, and exhibits will educate the public on the Mayflower story, the town of Plymouth, and the Mayflower Meetinghouse.

“This iconic landmark, and the story it tells, is truly an authentic part of American history, and a treasure we want to share,” said Governor General George Garmany, GSMD. “While members of GSMD are honored to have lineal descent from the Mayflower Pilgrims, we know our ancestors are truly America’s family.”

In addition to colorful photos of the Robinson stained-glass windows, two banners hang on either side. One displays the new name, the National Pilgrim Memorial Meetinghouse (NPMM), and the other a thank you to both the residents of Plymouth for supporting the Community Preservation Act (CPA) and to the Fall 2018 Town Meeting representatives for dedicating the CPA fund to restore the exterior façade of the National Pilgrim Memorial Meetinghouse.

This is the fifth structure on the location where the Mayflower Pilgrims built their first Meetinghouse in 1621. It sits at the top of Leyden Street, the oldest Main Street in America.

Over a million people are expected to visit Plymouth during 2020, the 400th anniversary of the Mayflower voyage. Today, there are over 10 million Americans who descend from the Mayflower Pilgrims and over 35 million worldwide.

About the General Society of Mayflower Descendants (GSMD)
Founded in 1897, The Mayflower Society, or General Society of Mayflower Descendants (GSMD), is a 501(c)(3) non-profit organization with national headquarters in Plymouth, Massachusetts. Membership requires proof of lineage from one of the passengers who traveled to America on the Mayflower in 1620. Its mission is to educate the public about the Mayflower story and its impact on Western civilization. GSMD upholds the highest standards of genealogy research in verifying the lineage of the Pilgrims. The Mayflower Society operates The National Pilgrim Memorial Meetinghouse on Plymouth’s Town Square, the Mayflower Society House, and a genealogy research library at its Plymouth headquarters. It publishes Mayflower Families Through Generations, also known as the “Silver Books” because of the distinctive covers. Website: http://www.theMayflowerSociety.org; Instagram.com/themayflowersociety; twitter.com/gsmd; Facebook.com/GSMD