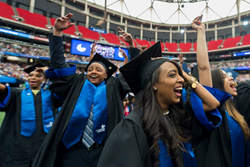 “The message here is simple: students’ chances of graduating need not be dependent on their race, ethnicity or income level,” senior vice president for student success Timothy Renick said. “All students can succeed at high rates.”

For the sixth consecutive year, Georgia State University is first in the nation among not-for-profit colleges and universities in awarding bachelor’s degrees to African Americans, according to Diverse Issues in Higher Education.

Nationally recognized student success initiatives at Georgia State have eliminated achievement gaps based on race, ethnicity or income. The university has increased its bachelor’s graduation rates by 23 points, and African-American, Hispanic, Asian-American and low-income students now graduate from Georgia State at rates at or above those for the student body overall.

“The message here is simple: students’ chances of graduating need not be dependent on their race, ethnicity or income level,” senior vice president for student success Timothy Renick said. “All students can succeed at high rates.”

Georgia State is also a leader in master’s degrees conferred to students from racial and ethnic minority groups, ranking fifth in business fields as well as physical sciences. Among African-Americans, the university is in the top 15 among U.S. universities in majors for master’s degrees in fields, including business, physical sciences, public health, mathematics and statistics, biological and biomedical sciences, public health, parks, recreation, leisure and fitness studies and area, ethnic, cultural, gender and group studies.

“Georgia State’s graduate programs attract outstanding students from diverse backgrounds who go on to become leaders in business, academia, as well as government and health sectors,” said Lisa Armistead, associate provost for graduate programs. “Diversification of the nation’s professional workforce is a high priority for the institution.”

Georgia State is working to increase opportunities for students among underrepresented backgrounds to enter graduate and professional programs. The Center for the Advancement of Students and Alumni encourages and supports students from underrepresented populations to enter advanced degree programs that can lead to academic and professional careers.

More information about the rankings is available at http://diverseeducation.com/.