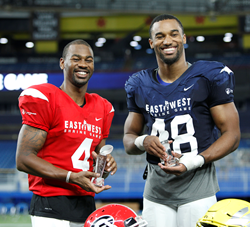 The E. Jack Spaulding Award for Most Outstanding Defensive Player was awarded to Oregon linebacker Justin Hollins of the West team. Hollins registered 10 tackles (9 solo), 2 sacks, and 3 tackles-for-loss in a highly disruptive afternoon.

The William H. Coffman Award for Most Outstanding Offensive Player went to Terry Godwin II, wide receiver out of the University of Georgia. Godwin scored 2 touchdowns for the East squad with four catches and 80 yards.

The game was played in front of a crowd of 19,654 inside Tropicana Field and was broadcast nationally on the NFL Network.

About the East-West Shrine Game: Originating in 1925, the East-West Shrine Game is the longest-running college all-star football game in the country and features some of the highest-rated players in the projected NFL draft ranking. While the teams are divided by East and West, the players come together for the beneficiary of the event, Shriners Hospitals for Children.