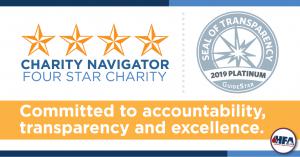 HFA Given Top Honors by Charity Navigator and GuideStar

WASHINGTON, D.C., UNITED STATES, July 8, 2019 /EINPresswire.com/ — Hemophilia Federation of America is committed to transparency, a fact recently recognized when the organization received a four-star rating by Charity Navigator and a Platinum Seal of Transparency by GuideStar, two respected nonprofit watchdogs.

With an annual operating budget of more than $6 million, HFA relies on a diversity of funding sources and is proud to regularly acknowledge donors and sponsors, which helped contribute to the recent honors. In addition, low administrative and fundraising expense means HFA is able to direct nearly 94 percent of all donations toward educational programming for patients living with bleeding disorders and their families.

The four-star rating with Charity Navigator is the highest honor given by the organization which evaluates and monitors the financial health, accountability and transparency of nonprofits in the United States.

The Platinum Seal of Transparency is the top honor given by GuideStar, indicating HFA has been forthcoming in providing key information to the organization’s nonprofit profile, which is available to the public and displays the organization’s measurable impact.

Hemophilia Federation of America is a national nonprofit organization consisting of more than 50 member organizations and numerous individual members, offering assistance, education and grassroots advocacy on behalf of the bleeding disorders community. Incorporated in 1994, HFA provides programs and services to improve the quality of life and access to care for persons with hemophilia, von Willebrand disease and other rare bleeding disorders. For more information, visit our website at www.hemophiliafed.org, email [email protected], or call 202.675.6984.