The Hon. Dr. Dale Layman, Founder of Robowatch LLC, sits down with Daniel Houle for a Spotlight Interview discussing his life and career. In May 2019, Dr. Layman was named Top 100 Registry's Man of the Year for his work in raising awareness in the fields of Robotics and Artificial Intelligence. 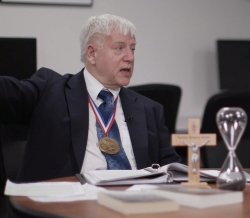 Chicago, IL, June 27, 2019 — The Honorable Dr. Dale Pierre Layman, AS, BS, MS, EdS, PhD #1, PhD #2, Grand PhD in Medicine, MOIF, FABI, DG, DDG, LPIBA, IOM, AdVMed, AGE, is the Founder and President of Robowatch, LLC. (The website is at www.robowatch.info) Robowatch is an international non-profit group whose main purpose is to keep a watchful human eye on the fast-moving developments occurring in the fields of robotics, computing and Artificial Intelligence (A.I.) industries.

From Fall of 1974 to Spring of 1975, Dr. Layman was hired under the Federal CETA Program, for one year, as an Instructor in the Biology Department, at Lake Superior State College. A major career achievement occurred in the Fall of 1975. It was then, that Dr. Layman was hired as a full-time, permanent Instructor in the Natural Science Department of Joliet Junior College, Joliet, Illinois.

While he was still employed at Joliet Junior College, Dr. Layman ardently kept going and going for more schooling. In 1979, he received an Ed.S. (Educational Specialist) degree in Physiology and Health Science, from Ball State University. Dale received his first Ph.D. from the University of Illinois, in Health and Safety Studies, in 1986. In 2003, Dr. Layman received both a second Ph.D., as well as a Grand Ph.D. in Medicine, from the Academie Europeenne D'Informatisation (AEI) and the World Information Distributed University (WIDU). He also holds a Full Professorship in the World Information Distributed University.

Dr. Layman requested that the 2000 Millennium Time Capsule of The International Biographical Centre (Cambridge, England) include extracts from the presentation he delivered on 25 June 1999, at the National Convention of Text and Academic Authors, in Park City, Utah. His talk was entitled, “Facing the Robotic Challenge: Coping with Growing Computer Dominance Over the Access, Writing, and Distribution of Information.” During this landmark talk, Dr. Layman first publicly explained his unique concept: Compu-Think, a contraction for computer-like modes or ways of human thinking. The creation of the Compu-Think concept reflects the dire need for us humans to develop more “computer-like” modes or ways of Natural Human “thinking.”

As revealed in The First Five Hundred at the New Millenium (International Biographical Centre, Cambridge, England, 2000), “Dr. Layman’s latest worries are two-fold. The first concerns the potential wholesale devaluation of the human mind and body through the insidious dominance of the computer and its offspring, artificial intelligence… He deplores the widening gap between the computer-literate and the computer-illiterate, the latter being considered as inferior. He has even recognized a future possibility for the computer to be regarded as superior to man. His other worry focuses on developments in genetics [especially genetic engineering]… Although he believes that people will gradually come to realize what is happening both in the case of computers and that of genetic engineering, he cannot predict whether their reaction will be of resistance or acceptance.”

Ever a lifelong student, taking classes for the past two years at Joliet Junior College, Dr. Layman was very pleased to have just recently received (during March, 2019), his second formal induction into the world's largest honor society for community college students, Phi Theta Kappa. The local chapter at Joliet Junior College is the Alpha Lambda Phi Chapter. How amazing it is, for Dr. Layman, to have received his very first induction into Phi Theta Kappa Honor Society, way back in 1967, while he was a freshman at Lake Michigan College. How the world so mysteriously turns. And now – 52 years later – Dr. Layman feels a strong curiosity, almost as if he is still a young student, entering his second childhood of life.

Dr. Laymen is honored as the Top 100 Registry’s 2019 Man of the Year. In June Dr. Layman sat down with Daniel Houle to discuss his life, career, and some of his latest work.