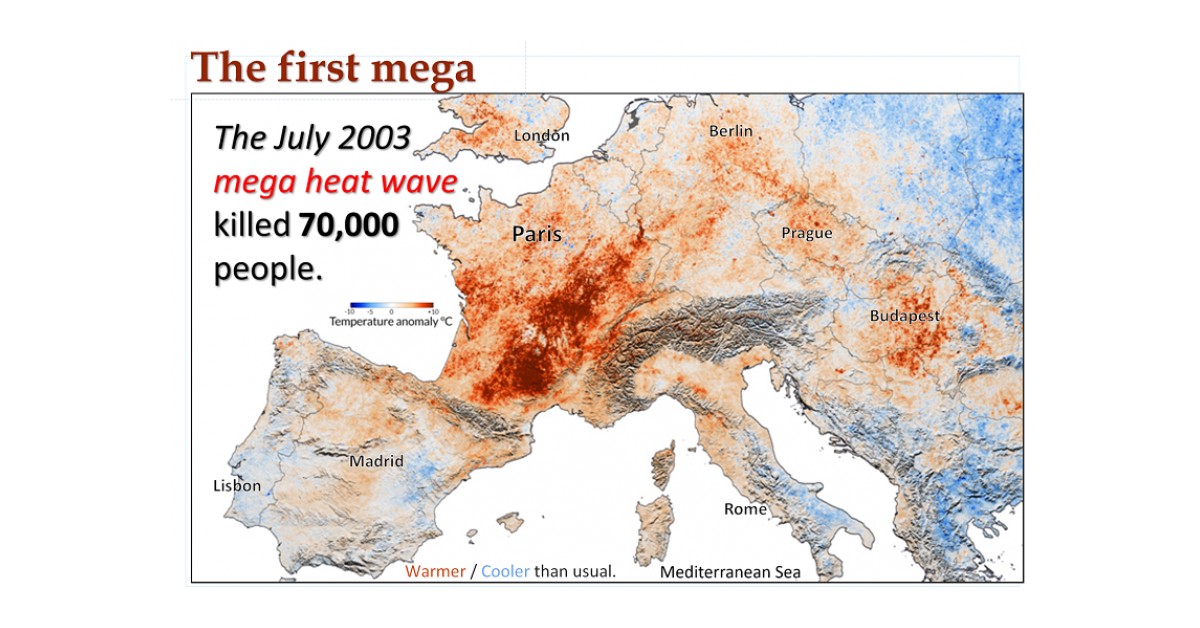 SEATTLE, July 2, 2019 –  In Europe, another severe heat wave is in progress. In the United States, high summer temperatures kill more people than hurricanes, tornados, floods and lightning combined. But how? William H. Calvin, Ph.D., president of CO2Foundation.org, a Seattle-based organization working to educate policymakers and the public about extreme weather threats and the need for removal of excess CO2, says to “remember the megas.”

Dr. Calvin, author of the book Global Fever (2008), wrote the first major magazine article on abrupt climate change back in 1998, a cover story for The Atlantic called “The Great Climate Flip-Flop.” He says that North America needs to be prepared for its own mega; that the two megas were part of a surge in five extreme weather types.

The first mega killed 70,000 in a week’s time back in the summer of 2003, stretching from England east into Hungary, from Berlin south into Spain. This European mega killed a hundred times more than did the big Chicago heat wave in 1995.

Comment at the time pegged the 2003 European mega as a chance-in-a-million freak, unlikely to be seen again in our lifetimes. Seven years later, the Russian mega killed 56,000 in a week and ruined 30 percent of their grain crop. The mega triggered bread riots in many countries and served to synchronize the 2011 Arab Spring uprisings.

Both megas came from the combination of poor rains during the spring, followed by a summer high-pressure system blocked by a stalled jet stream loop. Clouds never arrived and eventually, all the surface soil moisture was gone, so there was no more evaporative cooling near the surface. Losing the background cooling allowed the near-surface air to get even hotter.

What makes for such fatality rates, and in developed countries at that? Calvin says one way a heat wave becomes a major killer is via an unbroken string of sleepless nights, given one’s need to fan and sponge continuously. By the third night, many people are in a stupor and may forget to drink enough water or urge it on the more vulnerable children and elderly. Heat stroke results when one runs out of sweat — the skin becomes hot and dry — and the body temperature rises, unchecked. Breathing stops as the brain cooks. Ice packs on the side of the neck, or a bathtub of cool water, are the best emergency treatment.

If it is also very humid, as it was in Chicago in 1995, sweating becomes less effective because evaporation is slowed down so much that the sweat drips off before it can evaporate and cool the person. “The body just keeps producing more and more sweat, hastening heat stroke,” said Dr. Calvin, who is also an emeritus professor at the University of Washington School of Medicine. “Bedroom air-conditioning becomes essential to head off stupor.”

What are the predictions for North America getting hit by a mega? “Wrong question,” Dr. Calvin says. “We will get one-week warnings, but nothing specific for the longer-term, as when we talk about the climate creep for overheating.” Fifty years ago, climate scientists were able to warn there would, in general, be more extreme weather; the warning was often repeated. “But it is far more difficult to specify a year for a game-changing climate leap,” he said. “We’ve already had one, and it wasn’t just the mega heat waves. A similar jump in severity or numbers can be seen for four other types of extreme weather: stalled hurricanes, severe windstorms, inland flooding and fire weather. Their sustained surges got started between 2000 and 2012, as if there was a sudden regime change, making prior statistics obsolete. A climate game-changer.”

“The danger of a North American mega comes from the 2000-2012 leap. It doesn’t depend on some future leap. With only seven years between the two megas, we need to prepare. I’d say one could happen anytime. Remind your elected officials.”

William H. Calvin, Ph.D., is the president of CO2Foundation.org, which is busy trying to educate policymakers and the public about extreme weather threats and the need to quickly draw down the 45% excess of CO2 overhead. His email is [email protected].

Here are some resources — in addition to the recent IPCC and the similar National Academies (US), Europeans and Royal Society (UK) reports on the new climate.