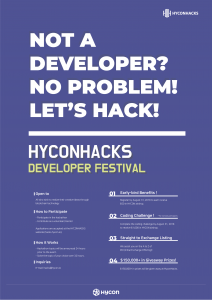 SEOUL, SOUTH KOREA, August 27, 2018 /EINPresswire.com/ — HYCON (CEO Taewon Kim) announced on August 27 that it will host a large-scale hackathon event titled ‘Hycon Hacks (https://hacks.hycon.io/) at the KBS Arena in Seoul on September 14th and 15th. HYCON is a cryptocurrency platform developed by Glosfer, a first generation blockchain company in Korea.

Hycon Hacks was designed to provide employment opportunities and blockchain experience to all who wish to realize their creative ideas through blockchain technology. In addition to the hackathon, Hycon Hacks will include gaming events as well as performance by famous singers to create a festive atmosphere during the two-day event.

A total of 150 million won will be awarded to participants as airdrop and education will be provided on the topic of IEO (Initial Exchange Offering) for those who are interested in listing their coin without conducting an ICO.

“Korean blockchain companies including Glosfer have grown at a rapid pace over the past few years,” said Taewon Kim, CEO of Glosfer. He added, “HYCON will host many more hackathons in the future including overseas events to present Korea’s advanced blockchain technology to the rest of the world.”