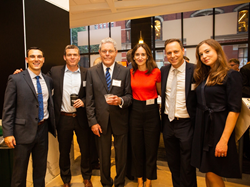 The timing of the event coincided with the New York City Economic Development Corporation’s (NYC EDC) unveiling of its plans to transform New York City into a global leader of cybersecurity innovation and talent to combat one of the world’s greatest threats. Cyber NYC, the City’s initiative to grow the cybersecurity sector, leverages a roster of world-renowned partners to launch a Global Cyber Center, an innovation hub for startups, initiatives to fuel commercialization and research, and new talent pipelines to train the cyber workforce of the future. SOSA, one of the organizers of Cyber Innovators 2018, was selected to establish a center of gravity for the industry with a state-of-the-art center in Chelsea which will bring together an international community of corporations, investors, startups, and talent to foster collaboration and innovation in New York City’s growing cybersecurity ecosystem. Guy Franklin, General Manager of SOSA NYC said “NYC is the financial capital of the world and as such, requires to be the cyber capital of the world to meet daily threats. That’s the goal of Cyber NYC.”

Ana Arino, the Chief Strategy Officer of the NYC EDC, kicked off the presentations for the evening and described the EDC’s role in developing NYC tech and job creation. “From an industry perspective, we (NYC EDC) have been committed for a very long time to tech in particular” said Ms. Arino. “One reason for our success and growth is that we have committed ourselves to making New York City a home for international companies that want to grow here.”

Cybersecurity is becoming a growing challenge for any company that maintains customer data, especially businesses in the financial services sector. New York City is home to one of the highest concentrations of financial services companies as well as to one of the largest workforces in the country. Global demand for cybersecurity services is surging. In the first 10 months of 2017, venture capitalists invested $1.2 billion in cybersecurity firms based in the New York metro area, four times the total investment in 2016. The City of New York is investing $30 million to grow its cybersecurity ecosystem.

Nadav Zafrir, Co-Founder and CEO of Team8, delivered the Keynote presentation for Cyber Innovators, and spoke on the impact of hyperconnectivity on the evolving cyber threat, sharing his perspective on how organizations can rethink their approach to building resilience in the face of increasingly sophisticated and effective attackers.

“Team8 is honored to participate in the Cyber Innovators 2018 Event with the broader New York City community.” said Zafrir. “In the age of hyperconnectivity and the increasing role of collaboration in standard business practice, a proactive and collaborative approach between enterprise, government, innovators and academia will help secure our collective future. We look forward to being a part of this important cooperation.”

Inon Elroy, Economic Minister to the Government of Israel’s Mission to North America, also delivered a presentation on the role of Israeli companies as global leaders in the cyber security economy.

In addition to the keynotes, three young companies in the cyber industry, (i) L7 Defense, (ii) IDRRA, and (iii) Team8’s Blockchain Concept Company (name yet to be announced) made presentations highlighting their business concepts and respective commercial solutions to cyber security threats, including the use of Artificial Information (AI). The presenting companies fielded questions from a panel comprised of Wilson Lin, Vice President, Lead for Cyber NYC and FinTech at the NYC EDC, and Lluis Pedragosa, Chief Financial Officer for Team8.

Cyber Innovators 2018 distinguishes itself from other NYC cyber events through its exclusive investor-focused audience and its world class presenters. “Cyber Innovators 2018 is making meaningful connections between capital and thought leadership by exposing active technology investors to the leading cyber company thinkers on the globe,” said Alon Harnoy, Managing Partner of Shiboleth NYC.

Playground founder Guy Poreh added, “The startups presenting are in very exciting and
innovative spaces, surrounded by great founders. The investor-oriented portion of the event
provides the opportunity for these companies to get excellent exposure with our amazing
audience.”

Industry Innovators has provided sophisticated investors early access to rock star companies that have gone on to become huge successes.