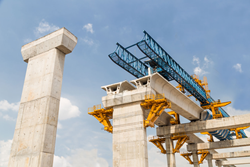 Bridges endure a LOT of stress on a daily basis.

Have you ever wondered how bridges accommodate the stresses we apply to them? Why does the constant vibration of Los Angeles traffic not crack foundations, why does the sudden breaking of a speeding freight train not separate steel from its anchors?

A LOT of stress.

When travelling the world; to and from work, to the mall, or to the side of the road to ponder the world’s largest ball made from rubber bands – people cross bridges. The big ones impress, the smaller spans are hardly noticed. Most people never wonder how these structures accommodate the stresses applied to them. Why does the constant vibration of Los Angeles traffic not crack foundations, why does the sudden breaking of a speeding freight train not separate steel from its anchors?

Man-made stresses are no match for Mother Nature. Outdoor structures of every kind either concede to her superior strength, conform to her movements, or they fail. How then, can bridges and dams stand up to Chicago’s cold, to Arizona’s heat, and to California’s rumbling earthquakes?

The answer is RUBBER.

This recently released education aid describes the unique ability of polymers to stretch and recover in the context of how they help keep bridges safely suspended. More specifically, it covers the eight characteristics of properly compounded rubber that allow man-made structures, like bridges, to recover from such a wide variety of stresses over time.

The parts that prevent bridge components from failing under stress are called bearing pads. They are mostly made out of Neoprene rubber and they sit between the concrete pilings and bridge surfaces – allowing the bridge surface to vibrate and to expand and contract without grinding against the concrete that holds them up keeping it all in the air.

The informative (full) document explores the most commonly measured characteristics of neoprene rubber and how they work together to keep bridges (cars, buses, trucks and trains, too) in the air. It clarifies the following characteristics and how they are measured in an easy to understand way:

From earthquakes and hurricanes, to freight trains and LA traffic, neoprene rubber components need to function as designed decade after decade. The effects of sunlight, ozone, heat, and cold need to be address as well in the formulation so that the bearing stretch and recover and protect bridges and other critical infrastructure. The full article provides a more in-depth exploration of each of the characteristics, and offers insights into the corresponding measurements, and how to interpret them.

The full article “Invisible Infrastructure – building bridges on the properties of neoprene rubber” and images can be viewed and/or downloaded on the website –Read full article, click here.