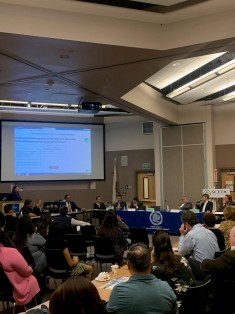 Amidst the announcement of UK Prime Minister Theresa May's resignation, San Diego and Ireland look to a future of stronger European ties and relations between the two

SAN DIEGO, May 24, 2019 – Friday, panelists and community members came together to connect and expand on the budding partnership between San Diego and Ireland. The South County Economic Development Council organized the Ireland Business Forum at the South County Regional Education Center with event sponsors, the Consulate General of Ireland, the Irish International Business Network and the San Diego World Trade Center. The event gathered Irish business leaders and San Diegans alike to start a dialogue about the economic, cultural and business opportunities presented by a partnership.

The link between San Diego and Ireland has been informally established prior to the business forum. Currently, there are 32 Irish firms in San Diego which have created 4,389 jobs with an average wage of $62,000, as well as several well-known, San Diego-based companies currently linked with Ireland.

“There is no surer partner for San Diego, for California, for these United States, no firmer friend than Ireland,” said O’Driscoll in his opening remarks. “In a post-Brexit world, which seems relevant to be thinking in that context this morning, Ireland will continue to be that place that connects the U.S. and Europe, providing a gateway as envisioned by our forefathers.”

O’Driscoll cited that each week, the flow of trade between Ireland and the United States is over $2 billion. He also announced that for the first time, Ireland will be placing a new consulate in Los Angeles, California, as a part of an initiative called “Global Ireland 2025.” The purpose of the government initiative is to double the scope and impact of Ireland’s global footprint from now to 2025.

Among other topics discussed were the announcement of the U.K. Prime Minister Theresa May’s resignation, the possible barriers between Irish and San Diegan business relations, and desired outcomes of fostering the international bond.

“If companies are leaving the U.K. because of Brexit, come to Ireland. I’m glad Theresa May resigned,” said Dermot O’Shea. O’Driscoll went on to state several stats about the current flourishing economic environment in Ireland including Ireland being number four in Foreign Direct Investment (FDI), the employment rate at 67 percent and Ireland being ranked eleventh in global scientific research.

Potential barriers to engagement between San Diego and Ireland were conversed, among them were the procurement of a travel visa for Irish people to come to Southern California, increasing awareness of the partnership, maintaining consistent communication and developing an objective plan of action.

Opportunity that exists includes research collaboration between major San Diego and Irish biotech and biopharma companies, Ireland being the last English-speaking county in the EU, the fast-growing Irish economy and the upcoming Consulate General of Ireland location in Los Angeles.