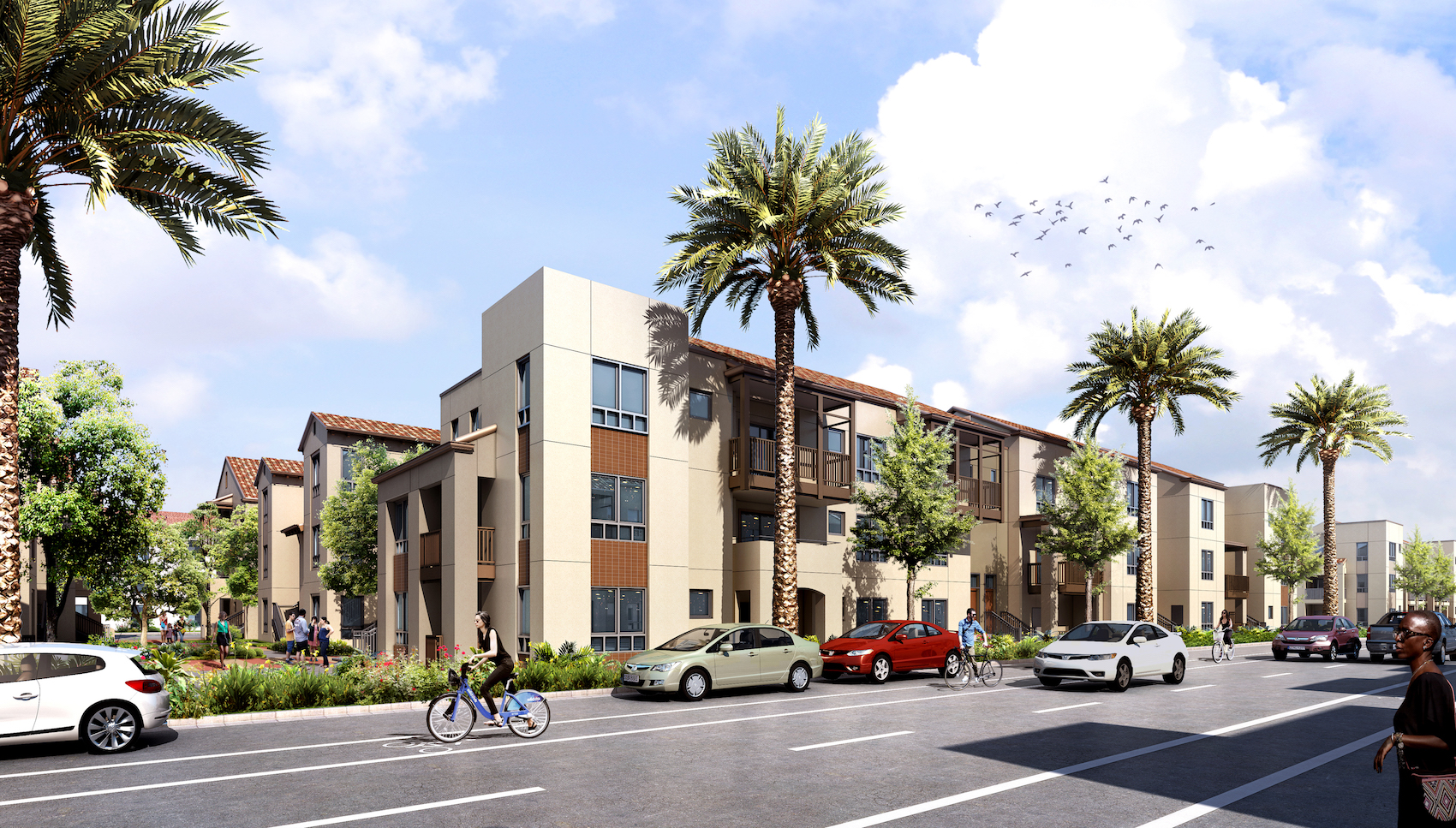 Los Angeles Mayor, city officials, partners and community residents join The Michaels Organization and the Housing Authority of the City of Los Angeles to celebrate.

LOS ANGELES, September 28, 2018 – Accompanied by a marching band from Jordan High, a parade of walkers, bike riders, and electric vehicles and buses inaugurated the extension of Century Boulevard into the Jordan Downs neighborhood of South Los Angeles.

Surrounded by residents and other city and state officials, Mayor Eric Garcetti, Councilmember Joe Buscaino and City Engineer Gary Lee Moore led the parade down the city’s first “Complete Street” to a ceremonial groundbreaking for the next phase of housing underway at Jordan Downs, part of a comprehensive redevelopment of one of the city’s largest public housing communities by the Housing Authority of the City of Los Angeles (HACLA) and its private sector partners.

“Every community should have affordable housing for people who need it, sustainable energy that helps keep our air clean and clean, safe spaces where our children can grow up with confidence that all dreams are within their grasp,” said Mayor Eric Garcetti. “The redevelopment at Jordan Downs is about so much more than construction and landscaping — it's a living example of our determination to give all Angelenos a real chance at the opportunity and prosperity that they deserve.”

This is a great day for Jordan Downs and the entire Watts neighborhood.

Los Angeles Councilmember Joe Buscaino said, “In a time we so desperately need affordable housing in Los Angeles and beyond, HACLA has established a model that not only improves the quality and condition of public housing but improves the health and quality of life of an entire community, without displacing a single resident.”

The new housing, officially called Phase 1B, is being developed by The Michaels Organization, a nationwide leader in residential real estate, with full-service capabilities in development, property management, finance and construction. Michaels, along with the non-profit, California-based development company BRIDGE Housing, was selected by HACLA in 2012 to be the master developers for the Jordan Downs revitalization effort.

When fully complete, the site will be transformed into an urban village, with the 700 WWII-era units of the original Jordan Downs replaced by more than 1,400 new homes income-targeted to serve new and existing local residents, as well as new retail spaces, a new community center and over nine acres of open green space.

“This is a great day for Jordan Downs and the entire Watts neighborhood,” said Milton Pratt Jr., senior vice president of The Michaels Organization. “We are at this milestone — the first of many more to come — because of the unprecedented collaborative efforts of HACLA, residents and community stakeholders, along with the strong leadership of political officials at the local, state and federal level.”

The $73 million Phase 1B being developed by The Michaels Organization will offer 135 apartment homes over six blocks, in layouts from one-bedroom to five-bedrooms. All of the apartments will be affordable to families at or below 60 percent of the Area’s Median Income and 100 percent of the units will be supported by HUD’s Rental Assistance Demonstration program or Section 8 project-based subsidies administered by HACLA.

New and returning residents will also have access to a wide variety of social services programs focused on educational success, economic stability, health and wellness, and community empowerment.

Doug Guthrie, HACLA’s president and CEO, pleased to see such immense progress, said, “It is incredible to be standing here today, surrounded by the sights and sounds of construction, a beautiful green boulevard and a new community coming together. This vision sets the stage for a 21st Century Watts: promoting diversity, accessibility and sustainability. Values that stem from the history of Watts and purposefully invest in the prosperity of its future.”

The extension of Century Boulevard through the site was considered critical to the comprehensive redevelopment of Jordan Downs, providing residents with better connections to the surrounding community, while at the same time emphasizing sustainability, with pedestrian and bike friendly areas, and close proximity to Los Angeles’ most used light rail line. It is one of the first new streets constructed by the City of Los Angeles in decades and a testing ground for new Complete Street elements concerned with energy-efficiency and multi-modal access.

Financing for Phase 1B includes $25.4 million in private equity raised through the sale of federal low-income housing tax credits and $32 million in construction financing provided through the sale of tax-exempt bonds. This phase also benefited from more than $13 million in grant funding from the state as part of $35 million in funds received by HACLA from California’s Cap-and-Trade program. Michaels’ will also receive $50,000 in additional grant funds to support neighborhood bicycle safety programs and $1.3 million for a new neighborhood park that is being created on the site through the State’s Transformative Climate Communities program.

The tax credits and tax-exempt bonds were syndicated by Riverside Capital, a leading provider of investment capital to high-quality affordable housing developers. Bank of the West and Bank of America purchased the tax credits and Bank of America provided additional construction financing. Berkadia Commercial Mortgage provided a permanent Fannie Mae mortgage. The State of California provided $9.9 million in permanent funds through its Affordable Housing & Sustainable Communities program. The Housing Authority of the City of Los Angeles provided both a long-term ground lease and permanent debt financing and the U.S. Department of Housing and Urban Development provided the project-based housing vouchers.

“Jordan Downs is a great example of the transformative results public and private collaboration can have on communities,” said Sindy Spivak, community development market executive of Bank of America. “Bank of America is committed to supporting transformative developments like Jordan Downs that will make a positive and lasting impact on the community.”

The Michaels Organization will serve as the property manager for Jordan Downs and has collaborated with HACLA and its co-developers to create an association and management approach that will ensure the community is well-maintained, supports existing residents and extends its positive reach to the entire Watts neighborhood.

About The Michaels Organization: The Michaels Organization is a national leader in residential real estate offering full-service capabilities in development, property management, finance and construction. Michaels brings comprehensive solutions to communities that jump-start housing, education, civic engagement and community prosperity, and is committed to creating communities that lift lives.