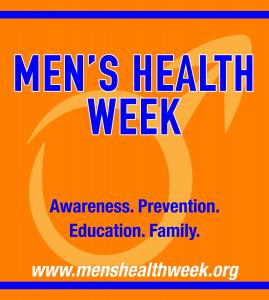 WASHINGTON, D.C., U.S., July 1, 2019 /EINPresswire.com/ — Men’s Health Month, the annual awareness period dedicated to the health and wellness of men and boys, came to a close this weekend after a successful 30 days that reached millions of people through education activities, health screenings, and events. But the push for men’s health awareness won’t end in June! Men’s Health Network (MHN) continues to advocate for better health outcomes for men, boys, and their families throughout the year.

This June celebrated the 25th year of National Men’s Health Week (NMHW). There are over 400 proclamations from governors, municipal leaders, and Native American communities posted on the website. President Donald Trump also issued a statement recognizing NMHW from the White House. Health screenings, health fairs, lunch and learns, and distribution of educational materials by faith-based and community organizations reached millions of people nationally and globally.

“For 25 years Men’s Health Month and National Men’s Health Week have remained relevant to men, boys, and communities across the country,” said Ana Fadich Tomsic, VP of MHN. “During the month, MHN engaged our nation’s leaders on Capitol Hill advocating for policies and legislation impacting men’s health, as well as continuing to engage our corporate and non-profit partners to help spread the word to millions across the country.”

• Wear BLUE Day (the Friday before Father’s Day, June 14 this year) – Individuals from around the globe posted photos of themselves in blue to show solidarity for men’s health issues using the hashtags #ShowUsYourBlue, #MensHealthMonth, and #MensHealthWeek. Participants included the U.S. Surgeon General, the U.S. Department of Health and Human Services, the National Institute of Health, and the Office of Women’s Health, among others.

• Online Twitter chats – Men’s Health Network confronted the opioid crisis and its impact on men during the “Men and the Opioid Crisis” Twitter Chat. Other Twitter events focused on men’s mental health, the importance on men’s sexual health, and Latino men’s health. These chats were local and global in scope.

• MHN advisors and spokespeople reached a record number of households on media platforms and outlets including NBC, ABC, and other traditional and social media outlets nationwide raising awareness about men’s health and fathers as role models for their children.

“Now more than ever, it’s important that men use the momentum from Men’s Health Month to shift their health into the right direction,” said Jamin Brahmbhatt, MD, a medical advisor for MHN. “I hope men realize health is not just physical but mental as well. With the increase in mental health disease, it’s important that men are able to better communicate and have better avenues to communicate.”

• In May, as a lead in to Men’s Health Month, MHN sponsored the “First Responders: 9-11 and Beyond” Congressional briefing with the Congressional Men’s Health Caucus, Oncology Nursing Society, and International Association of Black Professional Firefighters.

• MHN partnered with the Congressional Men’s Health Caucus for the “Men’s Health Week / Women’s Health Week A look at the health and wellbeing of men and women after 25 years : Progress and Promises” Congressional briefing that included representatives from HealthyWomen, the Office of Population Affairs, the National Center for Health Statistics, and PCORI (Patient-Centered Outcomes Research Center).

• Key thought leaders in public health such as Dr. Paul Turek (a leader in men’s reproductive and sexual health care and research), Armin Brott (MrDad.com) and others contributed articles to the award winning Talking About Men’s Health blog. Editorials on Men’s Health Month drafted by MHN advisors were published in media outlets nationally.

• Members of Congress and local officials were photographed with proclamations from their districts as seen here: www.menshealthmonth.org/photo-gallery.html

Men’s Health Month is built around four pillars: Awareness, Prevention, Education, Family, and has encouraged the development of thousands of health awareness activities during the month of June and throughout the year, both in the USA and around the globe. Private companies, hospital systems, clinics, the faith-based community, fraternal organizations, the public sector, and others use the month of June to highlight their services and reach out to men and their families.

Men's Health Network (MHN) is an international non-profit organization whose mission is to reach men, boys, and their families where they live, work, play, and pray with health awareness messages and tools, screening programs, educational materials, advocacy opportunities, and patient navigation. Learn more about MHN at www.menshealthnetwork.org and follow them on Twitter @MensHlthNetwork and Facebook at www.facebook.com/menshealthnetwork. For more information on MHN's ongoing Dialogue on Men's Health series, visit www.dialogueonmenshealth.com