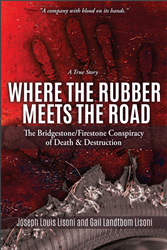 Specializing in product liability and personal injury cases, Lisoni and Lisoni seemed the ideal team to take on the tire tycoon and seek justice for the hundreds of deaths allegedly caused by the company’s shortcuts.

Mill City Press is an imprint of Xulon Press. A division of Salem Media Group, Xulon Press is the world’s largest Christian self-publisher, with more than 15,000 titles published to date. Where the Rubber Meets the Road is available online through amazon.com, and barnesandnoble.com.