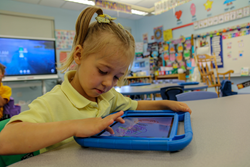 A pre-K student at Milton Hershey School utilized learning technology applications during class to share the gifts they would give to Milton Hershey.

“As a community, we’re showing gratitude for a man whose hard work and dedication helped so many,” said MHS President Pete Gurt ’85.

On Thursday, Sept. 13, the Milton Hershey School community is celebrating what would have been founder Milton Hershey’s 161st birthday. MHS students and staff plan to reflect on the legacy Mr. Hershey created when he founded the school in 1909.

“As a community, we’re showing gratitude for a man whose hard work and dedication helped so many,” said MHS President Pete Gurt ’85. “Milton Hershey put others first. He had an unwavering commitment to a vision he shared with his wife to support children who faced hardship and poverty. In the years he oversaw his school, he took great care to ensure students received the education and care needed to live fulfilling and productive lives. That gift of the Milton Hershey School endures and still transforms lives every day.”

In honor of his birthday, pre-kindergarten students completed exercises using learning technology applications to share the gifts they would give to Milton Hershey. Elementary students also created art projects inspired by Mr. Hershey.

Every student home on campus received a cake baked by the MHS food services team to honor the memory of Mr. Hershey’s 80th birthday when his employees surprised him with a three-foot high cake and 80 electric candles.

This evening, MHS high school students will hand out homemade cupcakes baked by the MHS Food Services team during The Hershey Company’s birthday celebration. The event will be held in ChocolateTown Square from 6:30 to 7:30 p.m.

More information can be found at mhskids.org.

ABOUT MILTON HERSHEY SCHOOL
Milton Hershey School® is one of the world’s best private schools, offering a top-notch education and positive home life to children in pre-kindergarten through 12th grade from families of lower income at no charge.