YJLacour is a hand-crafted luxury sneaker brand that is joining the movement of designers and entrepreneurs in creating models for what socially conscious Black owned business can become. Conceptualized by Yohance Lacour in 2010, the company's mission includes providing engaging employment and valuable networking opportunities for returning citizens. Production began in 2017. Lacour is based in Hyde Park, and all production takes place in Chicago. 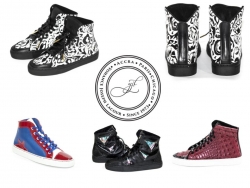 Chicago, IL, June 22, 2019 — YJLacour, Chicago’s first bespoke sneaker brand, will host its official launch with a party at The Chicago Art Department on Saturday, June 29th from 6pm – 9pm. This drop-in event is designed as a gala art opening and spirit raising, with a voucher for a custom made pair of high-end, handmade kicks given free to one lucky attendee.

Yohance is intent on his brand giving back to the city he loves. “Chicago is everything; it gave me a beautiful start and then allowed me to reinvent myself after some very bad decisions. I want to be a catalyst and allow everyone, especially formerly incarcerated men and women, to learn new skill sets; we’re creating a reinvention network to guide folks to positive work experiences that exist, notably jobs for those newly released from prison,” said Yohance, when asked why he’s not just focused on selling sneakers.

Lacour’s custom made footwear is already on order for some well known personalities. The brand’s fans include Mike Thomas, wide receiver for the LA Rams, and WGCI’s own Frankie Robinson. Frankie sees the future of Lacour: “I want to support Yohance’s vision for Chicago, and while I know it’s already happening, I really just need some of these shoes!”

The Chicago design house really began to take shape when Lacour sought out The Chicago School of Shoemaking to expand his own leather-working knowledge. A mentor/mentee relationship flourished into a friendship and business collaboration. Buoyed by that success, Sara McIntosh, owner of the Ravenswood based school, is partnering with Valerie Dramé to open a sewing & manufacturing enterprise to bring fabrication back to Chicago’s South Side.

Lacour plans to be the facility’s flagship customer, and it’s an integral part of Yohance’s reinvention network. Valerie Dramé, owner of Dramé designs, explained that the project is inspired by the need to address the disparity of economic opportunities on the South and West sides of Chicago; they’ll also focus on expanding connections with people from different neighborhoods and backgrounds. While they have decidedly different life experiences, Lacour, McIntosh and Dramé share a love of Chicago, indomitable spirit, and the deep desire to create opportunities for the community.

The YJLacour official Launch event is on Saturday, June 29th at The Chicago Art Department, 1932 S Halsted Street, in The Chicago Arts District, from 6pm-9pm. The entire experience is free, with interactive displays including a gallery show produced by Free Writes Arts & Literacy. Food and drinks will be provided by Taco Vegan, Food Hefner Catering, 21st Amsterdam, and Brooklyn Brewery. All snacks, beverages, and on-site screen printed Totes & Tees will be offered by donation.

YJLacour is a hand-crafted luxury sneaker brand that is joining the movement of designers and entrepreneurs in creating models for what socially conscious Black owned business can become. Conceptualized by Yohance Lacour in 2010, Lacour’s footwear is inspired by 90’s Hip Hop, historic fashion houses, iconic basketball shoes, and a longing to provide engaging employment and valuable networking opportunities for returning citizens. Production began in 2017. Lacour is based in Hyde Park, and all production takes place in Chicago.