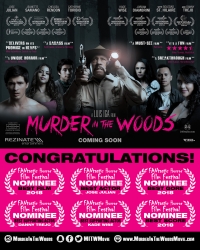 The award-winning film directed and produced by Luis Iga and written and produced by Yelyna De Leon has played to packed houses in Los Angeles, Portland, New York, Denver, Chicago, and now San Diego will get its first taste of what critics have called, “a breakthrough,” “smart, funny & very effective horror” film with a “phenomenal storyline” that “delivers on its promise in heaps.”

The film will play on Saturday, October 27 at 5:45pm at the Ultra Star Mission Valley Cinemas-Hazard Center located at 7510 Hazard Center in San Diego, California. Tickets are on sale now here: http://bit.ly/FANtastictixPR

“I am truly honored and grateful to receive these nominations. I want to congratulate all the nominees and I want to thank the festival founders JoAnn Thomas, Mike Thomas and everyone involved in the festival for being pioneers in supporting the diversity change that Hollywood needs. Furthermore, this film would not have been possible without our award-winning cast and crew; I want to thank them for their hard work in making this film a reality,” said director and producer Luis Iga. “I also want to thank Matt Chassin, the Festival’s Executive Producer for his support and for always being a fan of this film,” Iga added.

Writer and producer Yelyna De Leon said, “I’m very grateful for the opportunity to screen the film for audiences in San Diego at FANtastic Horror Film Festival so they can experience our fun film and see beautiful brown faces up on the big screen in non-stereotypical roles.”

The FANtastic Horror Film Festival in San Diego, CA is dedicated to bringing the latest and cutting-edge Indie Horror films to the local community; it is a three-day festival over Halloween and shows 30 plus Indie Horror Short and Feature films. Following the Fest they have an Award Ceremony to celebrate the award nominees and winners.

“Murder in the Woods” is a production of REZINATE Entertainment, founded by Luis Iga. REZINATE partnered up with Yelyna De Leon to produce this film. Both graduated with an MFA in Film and Television Production from the School of Cinematic Arts at the University of Southern California (USC) where they met.

About REZINATE Entertainment (www.rezinate.com):
REZINATE is an entertainment company founded by Luis Iga. The company is involved in the production, financing and distribution of audiovisual projects including Film, Television, Animation, Video Games and Virtual Reality. REZINATE has a global presence with clients and projects that are developed around the world.

For more information on “Murder In The Woods”: