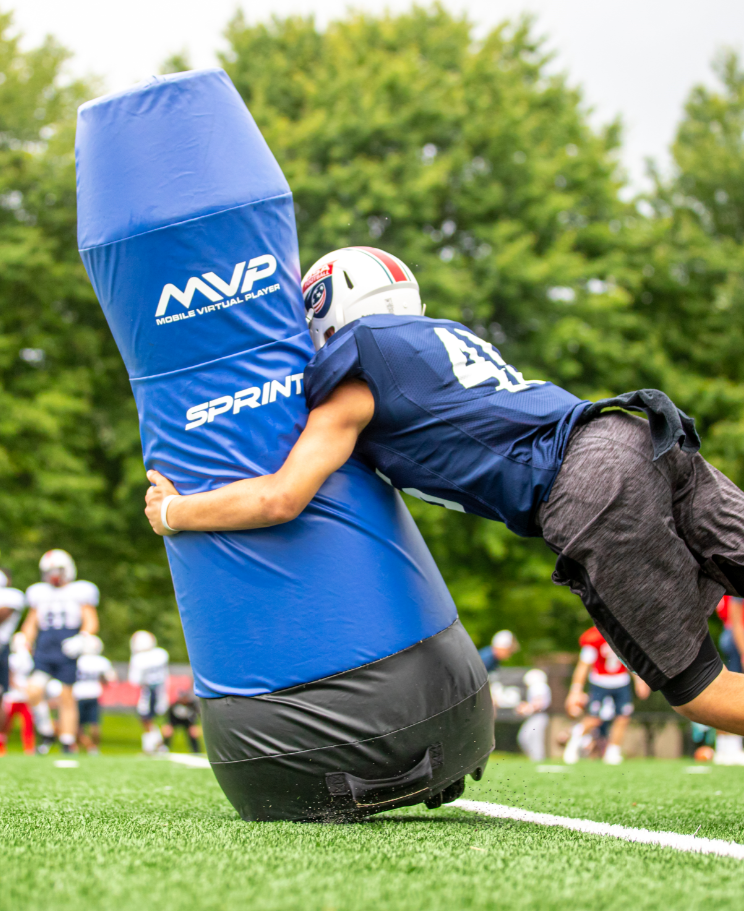 BOSTON, June 26, 2019 – ​​​With concussion concerns increasing and sports participation at the youth and high school level declining, Mobile Virtual Player (MVP)—the company that introduced football’s first robotic tackling dummies to the NFL, revisited the drawing board to redesign their robotic tackling dummies to lower the price in order to increase accessibility for football teams, so that they can increase player safety and reduce injuries while also improving player performance and technique. MVP is excited to announce the release of their newest model, the MVP|SPRINT ($3,450), which will begin shipping in August for the 2019 season.

Among high school football athletes, 57.7% of concussions occurred during practice, according to the study published by JAMA Pediatrics in 2015. The concerns over injury have also led to the unfortunate decline in participation, which has fallen nearly 30% in the last five years among kids ages 6-12 (Washington Post). In order to combat the alarming injury and participation rates, MVP’s team of engineers did a full redesign of their existing robotic tackling dummies with high school and youth budgets in mind. By redesigning and sourcing consumer electronic parts, the MVP team was able to successfully create a robotic dummy that is durable, sells for $3,450 and has increased performance on grass and the rougher field types that high school and youth programs often practice on—the SPRINT.

The SPRINT is the budget-friendly remote-controlled, self-righting, mobile tackling dummy, designed to replicate an in-game experience by simulating the size, speed and agility of an elite player. Weighing 165 lbs and reaching speeds up to 16 mph, the SPRINT enables teams to reduce player-on-player contact during practices while also providing a great teaching tool for athletes that are learning and perfecting proper technique. Now, more teams will be able to train like the pros with the latest technology.

“Protecting athletes is critical and the very reason MVP was developed. It’s a solution that will allow youth, high school, collegiate and professional players to fully execute a tackle, eliminating player-on-player contact during drills, while maintaining the level of challenge associated with tackling a live person.” –Dartmouth Head Coach Buddy Teevens, whose Ivy League program was among the first in the country to eliminate full contact and use MVP technology

The SPRINT is now available for order through www.mvpdummy.com.  For all media inquiries please email: [email protected].

Company Background: MVP began as a collaboration between Dartmouth Head Coach Buddy Teevens and a group of engineers and athletes from Dartmouth's Thayer School of Engineering. Together, they developed and patented the world’s first self-righting robotic tackling dummy to help reduce unnecessary player-on-player contact and the overall incidence of injuries suffered during football practices. MVP’s robotic tackling dummies were specifically engineered to replicate the performance and size of a skilled player, enabling teams to get game-like reps in a safer, more effective way. At Dartmouth, concussions were reduced by 58% in the first two seasons of implementing the MVP|DRIVES into practice. During the most recent 2018 season, 21 out of 22 starters on the Dartmouth Football team started and played in every game, leading them to a 9-1 finish. In the first two years of the robotic tackling dummies being available, MVP completely sold out of their MVP|DRIVES to half of the NFL teams, over 40 colleges, and more than 75 high schools.