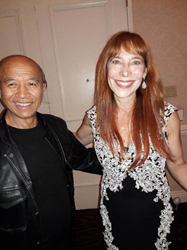 Dame Nicole Brandon (Actress, Humanitarian, Writer, Producer) is a 6-time inductee of the Hall of Fame for her Mastery of Motion and the Physical Arts in Television and Motion Pictures. Nicole has been awarded over one hundred National and International Titles in the world of Dance, Acrobatics, and Martial Arts. Nicole is noted as the youngest Physical Master in the World. Her books, videos, television shows and films can be found across the globe. Nicole is recognized and synonymous with Physical Mastery in the Arts. She has also been Knighted for her humanitarian work and she has been titled Ratu Muda (Duchess) for her global outreach, in the Royal House of Kupang. Nicole is also a multiple recipient and inductee into the “Elite Black Belt Hall of Fame.” This event will mark Nicole’s 7th USA Martial Arts Hall of Fame induction. This year she will be awarded the prestigious “International Actress of the Year Award” by the USA Martial Arts Hall of Fame.

Leo Fung was born Nov 23rd, 1928. His career spans the world of Martial Arts, Boxing and Film-making since 1970. He is a former Methodist Minister who has taken the Martial Arts World by storm. The “Living Legend Award” will recognize his body of work and his rich contribution to the World of Martial Arts.

Cynthia Rothrock is superstar. She has taken 1st place 32 times and she’s most noted as the first woman to appear on the cover of a martial arts magazine, and in 1986 co-authored a book with George Chung titled, “Advanced Dynamic Kicks.” Cynthia is being awarded the “Living Legend Award” for Competition in Films.

This renowned Hall of Fame was founded by Grandmaster Jim Thomas, Ph.D./D.Sc./Ma.Dsc. Dr. Thomas is a 10th degree grand master. He has been active in the martial arts for over half a century. In addition to serving as the head coach for Team USA, he was inducted into 6 various martial arts ‘Hall of Fame’ institutions and listed in ‘Who’s – Who’ in the world of Martial Arts. Grandmaster Thomas has won over 200 awards and trophies and served in the U.S. Air Force for 7 years during the Vietnam Evacuation Era. He was a former athlete for the USA World Class Competition Team and has appeared in over 8 Martial Arts Motions pictures.

The U.S.A. Martial Arts ‘Hall of Fame’ “Hall of Heroes” was originally created in 1976 by Grand Master Robert Trias, the first man to open a martial arts school in the U.S.

Saturday leading up to the awards, classes are offered from 10:00 to 4:00 to the public. The classes are taught and led by the world’s top Grandmasters making this the most sought after, Martial Arts Event in the World. A congratulations is extended to all the winners, past and present for their skill, brilliance and commitment to the world of Martial Arts.