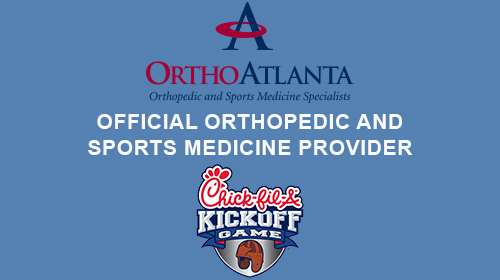 ATLANTA, August 20, 2018 – OrthoAtlanta is proud to serve as the official orthopedic and sports medicine provider to the 2018 Chick-fil-A Kickoff Game, a role it has held since the inaugural 2008 game. As the nation’s longest-running kickoff game, the annual Chick-fil-A Kickoff Game matches two top college football teams in a neutral-site game in Atlanta’s Mercedes-Benz Stadium to open the college football season. The nationally-televised Chick-fil-A Kickoff Game boasts an average in-stadium attendance of 68,887 over its 11-year existence and has been watched on television by more than 67 million viewers. The Saturday, Sept. 1 game, scheduled for 3:30 p.m. ET on ABC-TV, features a top-10 match-up between the No. 6 Washington Huskies and the No. 10 Auburn Tigers.

“As the official orthopedic and sports medicine provider of the 2018 Chick-fil-A Kickoff Game, OrthoAtlanta physicians, and medical staff will be present at the game, providing on-site orthopedic medical services throughout the game to the players of both teams, their coaches, staff, and officials,” cites Todd A. Schmidt, M.D., OrthoAtlanta orthopedic surgeon and medical director for the 2018 Chick-fil-A Kickoff Game. Dr. Schmidt is joined by OrthoAtlanta Medical Director, Michael J. Behr, M.D., who serves as the co-medical director to the game, and by additional OrthoAtlanta orthopedic surgeons from multiple orthopedic specialties, plus athletic trainers and administrative staff.

As the official orthopedic and sports medicine provider of the 2018 Chick-fil-A Kickoff Game, OrthoAtlanta physicians and medical staff will be present at the game, providing on-site orthopedic medical services throughout the game to the players of both teams, their coaches, staff and officials.

OrthoAtlanta staff will greet fans at the Chick-fil-A Kickoff Game FanZone presented by Coca-Cola pregame event on Saturday, Sept. 1, from 10 a.m. – 2 p.m. at the Georgia World Congress Center Building A. They’ll share behind the scenes information in the lead up to the game on their social media sites, including Facebook.com/OrthoAtlanta.

ABOUT THE CHICK-FIL-A KICKOFF GAME
Created in 2008 by Peach Bowl, Inc., the Chick-fil-A Kickoff Game is the preeminent bowl-style, neutral-site game featuring two elite football programs and has been nationally televised on the first Saturday of the college football season since its inception. The game has hosted teams with national rankings of No. 1 (twice), 2, 3, 5 (twice), 6, 7, 9, 14, 16, 18 (twice), 19, 22, 24 (twice) and 25 (three times). The Chick-fil-A Kickoff Game boasts an average attendance of 68,887, has been watched on television by more than 67 million viewers and has distributed $67.5 million in total team payouts. Since its inception in 2008, the Chick-fil-A Kickoff game has featured 10 national coaches of the year, 21 players who were recipients of national awards during their collegiate careers, a total of 58 first-round NFL Draft picks and two teams that have used the game as a springboard to a National Championship that same season. For more information, visit WWW.CHICK-FIL-AKICKOFFGAME.COM.