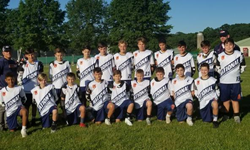 The team has gotten attention from coaches all over the country

Before February, 2018, most people had never heard of Parkland, a charming little city, tucked quietly west of Boca Raton. While the whole country was focusing on the tragic events at the local Parkland high school, a small group of 12 and 13-year-old boys were doing their best to move forward with their plans to shock the lacrosse world this summer – and they delivered. Meet the Team 91 Titans, the 2018 National Lacrosse Federation National Champions.

The Team 91 Titans made history in 2018 when Broward County recognized the team with a Proclamation, naming January 24, 2018 ‘Team 91 Titans Day’ in Broward County. Presented by County Commissioner, Michael Udine, at the Tamarac Recreation Center, the proclamation was presented to the team for their undefeated championship wins in 2017 which included a National Championship Sweep at the famous Dick’s Tournament of Champions held in Wesley Chapel, FL.

To learn more about this team, logon to http://www.team91titans.com