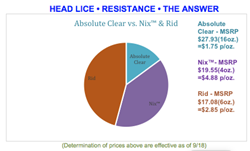 With the onset of the school year, the proliferation of head lice infestations grips communities nationwide. Yearly, more and more news outlets are highlighting the evolution of “super lice” or “superbugs”, called so because they are immune to most common anti-lice products.

In past reports, articles on super lice across social media like HealthDay state that over 25 states host head lice populations that don’t respond to common over-the-counter treatments.

But, as head lice populations evolve to protect themselves from lice-removal, the good news is that super lice are still very easily and thoroughly eradicated if handled properly and at lower cost than most chemically-based products or prescription remedies. O.C.'s Hair Police, an Orange County based head lice-removal company, says their Non-Toxic Absolute Clear proprietary enzymes is one of the few sure-fire ways to protect schools and children from head lice outbreaks.

Absolute Clear is derived from naturally occurring enzymes. The human head louse cannot become resistant to natural enzymes EVER because the enzymes break down the exoskeleton of the louse versus attacking the nervous system. The nervous system incorporates the ongoing evolution of specific genes within the head louse gene pool to ultimately develop the necessary resistance in order to solidify its existence. The skeletal structure of the head louse cannot do the same to ward off its destruction by natural enzymes.

Absolute Clear is a non-toxic, non-abrasive, and hypoallergenic mix. These naturally occurring materials are combined with surfactants and other biologically stimulating ingredients. Further, the enzymes are successful in loosening the glue that attaches the nits to the hair shaft thereby eliminating their viability by moving them away from the scalp and necessary heat in order to incubate and ultimately thrive while making their removal much easier.

For more information and validation of HealthDay’s claim, http://www.PubMed.gov, US National Library of Medicine National Institutes of Health provides the following information on the evolution of Super Lice.

Head louse infestations are widespread throughout the world and have been increasing since the early 1990s partially because of ineffective pediculicides. Pyrethroid insecticides act on the nervous system affecting voltage-sensitive sodium channels. Three-point mutations at the corresponding amino acid sequence positions M815I, T917I, and L920F in the voltage-gated sodium channel gene are responsible for contributing to knockdown resistance (kdr). Therefore, the “knockdown resistance (kdr)” toward pyrethroid is “…well established reaching an overall frequency of 88%, thus close to fixation.”