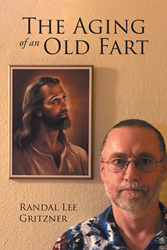 “The Aging of an Old Fart”: a life retold, is the creation of published author Randal Lee Gritzner, a natural storyteller and science teacher nearing retirement. He is a great-grandfather active in church activities.

Gritzner writes, “There are many ways for a young boy to grow into a man. Randal Gritzner took his own unique path. His personality and character were influenced by many people. Many of those people offered good Christian influence, and some offered influence of less positive nature.

“Randal’s parents were strong Christians with exceptional work ethic. Having all four strong Christian grandparents living within one mile offered additional foundation. Randal entered the US Navy with strong convictions that he would never drink alcoholic beverages. He did not live up to those convictions. He became a pot-smoking, beer-drinking man very much the opposite of his intentions. Individuals do come to mind who offered such influence, but Randal made those decisions himself. Nobody else is to blame, but Randal himself.

“Part of becoming a teacher is learning how to learn. There are many ways to learn, and most universities that offer bachelor degrees in education spend huge amounts of time discussing learning styles. Some people are auditory learners, some are visual learners, and some are tactile-kinesthetic learners. Randal understands and uses all three methods but frequently chose to learn by making mistakes, feeling the pain, and deciding not to feel that pain again. Fortunately for him, he didn’t get caught in some of his worst mistakes. That would have changed his life so dramatically that he would have never gotten a job in a room full of teenagers or been loved by the ‘love of his life.’ How different would his life be had he never been allowed to teach? How different would his life be had Elvia never taken a second look at him in 1983? She was not looking for an immoral man lacking in integrity. Elvia is a strong Texas woman who doesn’t need a man. She has proven to Randal that life with the right person can be incredibly richer than life alone!”

View a synopsis of “The Aging of an Old Fart” on YouTube.

Consumers can purchase “The Aging of an Old Fart” at traditional brick & mortar bookstores, or online at Amazon.com, Apple iTunes store, or Barnes and Noble.

For additional information or inquiries about “The Aging of an Old Fart”, contact the Christian Faith Publishing media department at 866-554-0919.