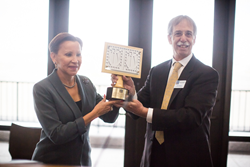 “Access to the arts and music education should not be defined by where you live or the state code that you live in.”– Rep. Nydia Velázquez, NAfME Hill Day 2018

Congresswoman Velázquez is the seventh recipient of the Music Education Champion award and the third member of Congress to receive the award. Previous congressional recipients include Sen. Lamar Alexander of Tennessee and Sen. Patty Murray of Washington (2016). Both were recognized for their work on the passage of the Every Student Succeeds Act (ESSA), which enumerated “music” as a stand-alone subject necessary for a “well-rounded education.” Other awardees include: Andrew Dost of the band fun. (2014); Brooklyn-based band San Fermin (2015); Barbershop Harmony Society’s 2009 International Champion Quartet, Crossroads (2016); CMA Foundation (2017).

“My father was a guitarist and he was just amazing. I wanted to learn, but we didn’t have music education in our school system, located in the rural areas of Puerto Rico. I sometimes try to imagine what my life would have become if I had access to music education. Access to the arts and music education should not be defined by where you live or the state code that you live in.”
– Rep. Nydia Velázquez, NAfME Hill Day 2018

“I am proud to introduce legislation that would open the doors for enriching music education in these schools and help to ensure that all children are exposed to the joy and benefits of learning music.”
– Rep. Nydia Velázquez, Press Release for the GAAME Act

Most recently, the Congresswoman introduced the Guarantee Access for Arts and Music Education (GAAME) Act, which is the first stand-alone bill to focus on arts and music education. If passed, this legislation would provide articulating language to encourage school districts to use their Title I, Part A funds to improve access to music education for disadvantaged and low-income students, taught by certified music educators. The legislation is bipartisan and has 59 cosponsors to date, with additional support growing day-by-day.

“This bill (GAAME Act) is an invitation for schools to consider music and arts education as they determine how to use their federal dollars.”
– Mike Blakeslee, NAfME Executive Director & CEO

The Music Education Champion award was presented to Congresswoman Velázquez earlier this year during NAfME Hill Day 2018. Bestowed only upon select, appropriate recipients through the course of NAfME’s 111-year history, the award recognizes personal commitment to the promotion of the music education cause, both through engagement with policymakers and outreach to potential music education supporters.

NAfME is grateful to the Congresswoman for her ongoing leadership and looks forward to working with her to ensure each and every student has access to a sequential and standards-based music education.

National Association for Music Education, among the world’s largest arts education organizations, is the only association that addresses all aspects of music education. NAfME advocates at the local, state, and national levels; provides resources for teachers, parents, and administrators; hosts professional development events; and offers a variety of opportunities for students and teachers. The Association orchestrates success for millions of students nationwide and has supported music educators at all teaching levels for more than a century. With more than 60,000 members, the organization is the voice of music education in the United States.