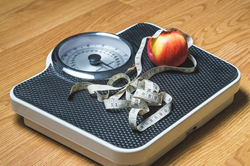 Your instinct is to run away and survive. Everyday stresses, worries and aggravations may not seem like a speeding train to one’s logical mind, but the primitive body considers any threat as a matter of survival.

Why is that some people gain weight under stress while others drop so much it seems every bone in their body is visible? San Luis Obispo nurse practitioner, Carol Rowsemitt, PhD, RN, FNP-C, says, “Weight gain, especially as a result of stress, has more to do with the human primitive body response and little to do with will power.” She understands this better than most dietitians because she specializes in this field.

Stress triggers the body’s fight or flight response, which is the natural survival instinct that tells us to run away from a threat and survive. The flight response is a natural biological survival mechanism. Triggered by hormones and neurotransmitters flooding our cells with signals to run away, all animals have this response and run to escape or turn and fight when escape doesn’t seem possible. We humans, however, have developed the ability to ignore the signals at a logical level, but that doesn’t stop the primitive body from continuing to do its job.

Rowsemitt, the San Luis Obispo nurse practitioner, explains the reaction to stress, as being stuck on a train track and the speeding train is not stopping. Your instinct is to run away and survive. Everyday stresses, worries and aggravations may not seem like a speeding train to one’s logical mind, but the primitive body considers any threat as a matter of survival. Prolonged stress—work deadlines, family matters, chronic pain, a demanding school schedule, a daily commute through heavy traffic—the primitive body keeps sending out signals about the threat. On the milder side of stress, we just get a headache and tight shoulders. At the upper end, such as surviving war, severe abuse and trauma, some develop Post Traumatic Stress Disorder (PTSD).

Everyone deals with stress and trauma differently. Many are able to cope with the flood of stress hormones and not have prolonged effects. Some don’t and the primitive body continues to respond as though the stress or threat is still present, eventually causing imbalances in the entire body.

To simplify a complex biological reaction, there are two primitive body responses to stress that can affect weight. One is that first signal to run and survive. The second is to eat and replenish the body’s fuel and energy to be ready for the next threat.

As long as the signal to run is active, appetite might be suppressed. If we don’t eat we lose weight. When the threat is over, we eat. Sometimes people get frozen in one or the other of these responses because the flood of hormones and neurotransmitters from the stress/threat causes cellular overloads and imbalances, resulting in issues with weight.

For some, stress also triggers the “famine response,” which is the primitive body survival response against starvation. “Eat now because we don’t know when we’ll have food again.” Whether the response is to eat to be prepared to escape or to avoid starvation, the primitive body is saying, “Eat now. We need food to survive.” When the primitive parts of our brains tell us there is not enough food coming in, the changes in brain chemistry causes several things, including:

These changes have been observed to still be present as far out as one year after weight loss.

The San Luis Obispo nurse practitioner, Carol Rowsemitt, although not a dietitian, specializes in helping people with weight loss, eating disorders and thyroid disorders. Before receiving her nursing degrees, Rowsemitt achieved a Bachelor of Arts (BA) degree in Chemistry from Boston University and her Ph.D. in Biology from the University of Utah. This experience has given her a unique understanding of the physiological human response to hunger and the challenges people face when losing weight.
Rowsemitt’s supervising physician is Dr. Steven J. McAllen, an internal medicine specialist in Templeton, CA. Formerly, her supervising physician was Dr. Thomas Najarian, an innovative pioneer in the field of non-surgical weight loss and appetite suppression medicine. Rowsemitt and Najarian authored the scientific paper, “TSH is Not the Answer: Rationale for a New Paradigm to Evaluate and Treat Hypothyroidism, Particularly Associated with Weight Loss.” The paper is available to public on the Thyroid Science website.