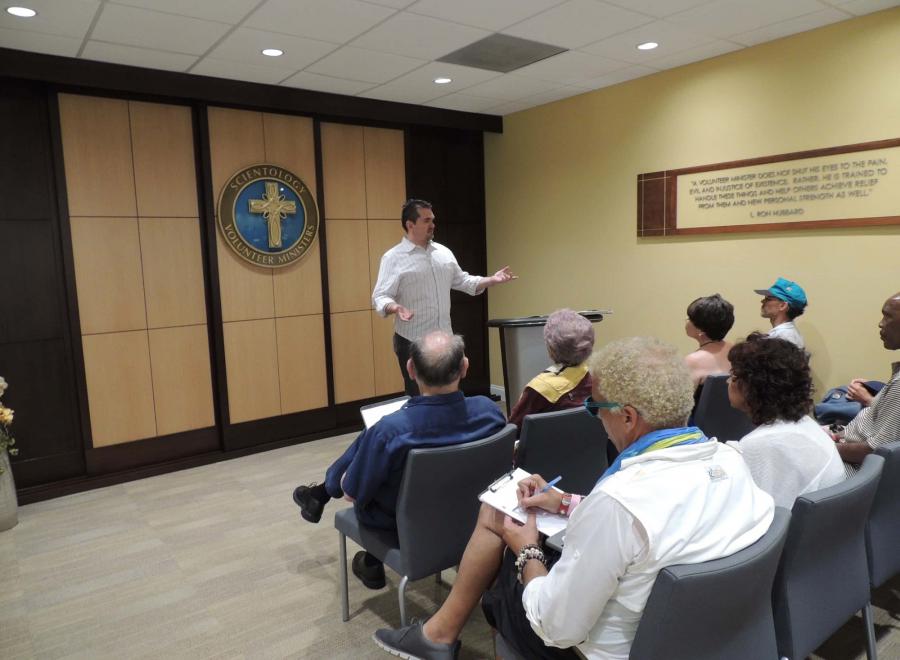 Lorand Fabian, Scientology Volunteer Minister, presented the basics of organizing to guests at the Scientology VM Center in downtown Clearwater

Mr. Hubbard takes us back to the basics, at exactly how to do it and a vital element often overlooked in even university studies – what does the whole organization, and each individual in it, produce?”

CLEARWATER, FLORIDA, US, July 4, 2019 /EINPresswire.com/ — On June 26th, Lorand Fabian, a trained Volunteer Minister who has studied and used L. Ron Hubbard’s philosophy for many years, conducted a seminar on the fundamentals of organizing in a seminar based on Mr. Hubbard’s works on the subject offered on at the Scientology Volunteer Minister Florida Center in downtown Clearwater.

“The subject of organization is basically simple, but most people have never learned the fundamentals,” said Fabian. “Mr. Hubbard takes us back to the basics, at exactly how to do it and a vital element often overlooked in even university studies – what does the whole organization, and each individual in it, produce?”

Seminar attendees were shown a video which defined organizational terms and showed examples of how organization works in different types of groups and companies. Fabian then presented the topic, beginning with “Why organize?” and led an interactive discussion about past failures and successes, and how they could apply their new knowledge to their companies, their families, any other groups in life, and even just to themselves.

The Volunteer Ministers Center on North Ft. Harrison Avenue has a free workshop on one of the 19 chapters of the Scientology Handbook every Tuesday evening. All are welcome to attend, both Scientologists and non-Scientologists. Anyone can train as a Volunteer Minister to help their families, friends and neighbors in a number of areas including Communication, How to Resolve Conflicts, and Solutions for a Dangerous Environment.

The Scientology Volunteer Minister (VM) program was launched more than thirty years ago, in response to an appeal by Scientology founder L. Ron Hubbard. Noting a tremendous downturn in the level of ethics and morality in society, and a consequent increase in drugs and crime, Mr. Hubbard wrote, “If one does not like the crime, cruelty, injustice and violence of this society, he can do something about it. He can become a VOLUNTEER MINISTER and help civilize it, bring it conscience and kindness and love and freedom from travail by instilling into it trust, decency, honesty and tolerance.” The program has adopted the slogan “Something Can Be Done About It”. At the Scientology Volunteer Ministers center in downtown Clearwater, VMs are trained in the 19 chapters of the Scientology Handbook, basic first aid, and safety techniques.