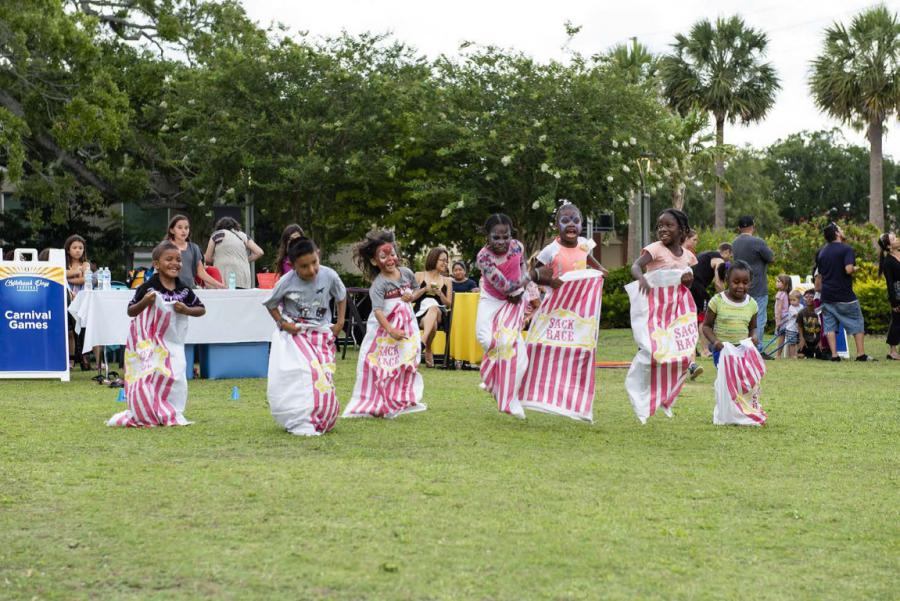 Children enjoying a sack race at the Children's Day festivities by the Scientology Volunteer Ministers.

We bring families together to celebrate on days like today and we help when times get tough and families need answers to the difficult questions of raising children and running a family.”

CLEARWATER, FLORIDA, US, June 15, 2019 /EINPresswire.com/ — On June 8th, perfectly timed between afternoon thunderstorms, Osceola Courtyard in Clearwater was filled with over 300 local parents and children for El Dia del Nino – Children's Day. Families enjoyed hula hoops, water balloons, dancing, music, and all the fun that such a day brings. The event was organized by the Scientology Volunteer Ministers Florida chapter and included participation from non-profits: I Am the Group Foundation, Shihan School of Survival Martial Art, Pinellas County Foster and Adoptive Parent Association, Tabernacle of Divine Glory Ministries, and Grupo Folklorico Mahetzi who opened the event with traditional Mexican costumes and dances. Children’s Day was founded in Mexico and spread throughout Latin America to set aside a day promoting the importance of children and family values.

“We recognize that children truly are the future,” said Glendy Goodsell, Executive Director of the Scientology Volunteer Minister Center in downtown Clearwater. “We bring families together to celebrate on days like today and we help when times get tough and families need answers to the difficult questions of raising children and running a family.”

While kids had fun with the balloon artist, face painter, and arts and crafts, parents got educated on all the vital work that the participating non-profits do in our community. They also learned about the Scientology Handbook subjects such as: How to Resolve Conflicts, Marriage, Children and The Components of Understanding, all of which can be studied in free online courses at www.volunteerministers.org.

The highlight of the event occurred in the team games of the egg relay, three-legged and potato sack races, and the water balloon toss.

To find out more about the Scientology Volunteer Ministers, take a tour at 101 N. Fort Harrison Avenue in downtown Clearwater or call 727-467-6965.

The Scientology Volunteer Minister (VM) program was launched more than thirty years ago, in response to an appeal by Scientology founder L. Ron Hubbard. Noting a tremendous downturn in the level of ethics and morality in society, and a consequent increase in drugs and crime, Mr. Hubbard wrote, “If one does not like the crime, cruelty, injustice and violence of this society, he can do something about it. He can become a VOLUNTEER MINISTER and help civilize it, bring it conscience and kindness and love and freedom from travail by instilling into it trust, decency, honesty and tolerance.” The program has adopted the slogan: “Something Can Be Done About It”. At the Scientology Volunteer Ministers center in downtown Clearwater, VMs are trained in the 19 chapters of the Scientology Handbook, basic first aid and safety techniques.