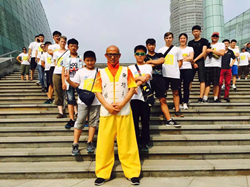 Shaolin Warrior intensive training is highly anticipated arts of Shaolin Zen and KungFu program promised for each participant an unforgettable life experience in eastern wisdom and martial arts in character of humbleness, compassion and integrity and indomitable spirit.

The highly anticipated Intensive Kung Fu-Warrior Training Camp designed for both beginner and advanced martial artists, community leaders and instructors, as well as future local and international instructors is right at the corner, scheduled for June 21st thru June 29th 2019 at Shaolin Institute on Atlanta campus. This highly anticipated arts of Shaolin Zen and KungFu program promised for each participant an unforgettable life experience in eastern wisdom and martial arts to not only learn the live street self-defense, but train in character of humbleness, compassion and integrity but indomitable spirit.

This 8 days Shaolin Intensive Kung Fu-Warrior Training Camp with Zen mind consciousness and GongFu as Bruce Lee introduced in his 1970s movie takes its turn back to the scene with full lay out.

That Zen consciousness is to set mind and body free beyond tradition and beyond any training old camp expectations anywhere around globe, including camps at Shaolin Temple, China and other camps in China in many ways. As Greater Master of the Shaolin Temple once expressed Shaolin is Zen in great consciousness.

Can one perceive, receive that information, and survive this camp if one is in the level of that plain field? If one does, one may be out of that short tunnel vision.  This is not about how good or what skill level one has. It is about one’s consciousness and one’s opening mind, and one’s mind and body freedom.

Is one ready to “be water” as Bruce Lee put it well. Shaolin Institute gives no excuses to any advanced students or beginners who came from anywhere around the globe.

This Shaolin Intensive KungFu Warrior training camp is beyond Martial Arts most people have perceived or have seen in technical endeavor alone; this is beyond material or visible things.  It is about how one can unveil that greatest potential and innermost intelligence through that GongFu,  which shapes that great character.  GongFu, the practice of grit which means persevere with passion in anything one pursues, guides each individual to stardom of  life journey in great fulfillment that will change the humanity forever peaceful in great harmony and happiness, expressed the grandmaster DeRu, the main teacher of the camp.

In this eight day & eight night in-residence intensive KungFu warrior training, students will be educated and trained in both body and mind aspects of Chan-GongFu. They will be trained in every aspect of the Shaolin GongFu fighting skills, ancient forms of fighting techniques and weapons as well as other internal & healing art forms.

The program will also provide students credits to one’s future leadership pursuit and teaching certification programs so that one may be able to teach either at one of the local Shaolin Institute campuses or a school of his/her own, said the camp master.

With a curriculum geared toward people who wish to be instructors or Shaolin GongFu Zen carriers, Intensive Kung Fu Warrior Training Camp is one of the pre-requisite for highly qualified instructors as well as local beginner level instructors. To view the complete program and schedule of instruction go to shaolin-world.net.

Master DeRu, modeled and redesigned Intensive Shaolin Warrior Training Camp after the ancient Shaolin Temple’s warrior training, and provides a a unique martial arts experience unlike any other around the globe.

Master DeRu challenges students to push their minds and bodies beyond their perceived limits, instigating one to push the envelope so to grow the strength of character, discipline, and perseverance that made the Shaolin warriors legendary.

The program will indeed include not only external martial arts of fighting and special weapons but internal arts like Zen TaiGong, Xing Yi, and Ba Gua. The main program will contain beginners’ traditional forms as well as advanced weapons such as drunken sword, Pu Dao, Guan Do and Iron Whip.

Shaolin camp started as early as 1988 at Mobile University campus, then, moved to the University of South Alabama. The camp later experienced many locations such as Spring Hill College Campus, Shaolin Institute New Orleans Campus and Atlanta new campus in Georgia.

Shaolin Institute various camps traveled and hosted far in many cities from Pensacola, Florida to New Orleans, Louisiana, from Daphne, Alabama to Washington D.C. and all the way to the Shaolin Temple of China.

Over thousands of kids and adults went through the training camps. For many years the Shaolin camps have worked together with the US national Sanshou team camps,  training together in various locations where some of the best world champions were produced under Grandmaster DeRu (Shawn X. Liu), the head coach of the US team.

Out of thousands of Children who have come and gone through the years, they all have a story to share of their hardships as well as sweet moments they have experienced at the camps.

Here is one of the stories about a Vietnamese-American young man Cung Le with his humble beginning. He was struggling with his direction in martial arts and in life after he was disqualified from a few Tae Kwando events. He called Grandmaster DeRu, his mentor later, many times on the quest for Kung Fu Sanshou fighting with which he believed that he could excel despite of his total ignorance of Kung Fu Sanshou/Sanda then. He made a great successes in his life journey

That was back in 1994 when Kung Fu Sanshou just took a first official leap in the US. It was that year when Cung Le won the first US Open Chinese Martial Arts Championship middle weight Kung Fu-Sanshou division along with David Sanders who won the light weight division grand champion. David was also from the institute.

Since then Cung Le has fought numerous fights in Sanshou and MMA world, and won many international and world professional championships. He has become not only a well-known action star in movie business but one of the most resilient fighters in Sanshou and MMA world. He has become, according to the media, the fiercest legendary fighter from Asia today.

After Cung Le, among many others trained by Master DeRu, Patrick Barry is another world class fighter coming out under the tutelage of DeRu of  Shaolin Institute. Patrick Barry then trained his girl friend Rose, another generation of fighters emerged.

Many students and even patients came to the camps from various parts of the US and around world, from Korea to Germany, from France to Brazil. They all came for one reason. That is to gain self-discipline and inner strength and ability to prevail in life with high consciousness and greater intuition.

All the training will be held at Shi DeRu Shaolin Institute, Atlanta Campus, starting on June 21st. The camp is for those:

Shaolin Warrior and leadership apprentice program will be also available during this Warrior Intensive Camp.

The Intensive Shaolin Warrior camp requires all day and all night training with on-site boarding.

The main teacher and the institute Master Shi Deru has passed down not only the knowledge of Shaolin Zen wisdom but martial arts of GongFu skills and character, which he is passing on to each and every student through his knowledgeable instructors.

Master DeRu is one of the 31st Generation Grandmasters and direct disciple of late Great Master and Chief Monk SuXi of the Shaolin Temple. He was introduced by China Central TV (CCTV) International Networks in many film documentary series to Asia and around the globe in Chinese speaking communities.

Shaolin Institute is committed to teaching original Shaolin wisdom as has been passed down from generation to generation for more than 1,500 years. Through the wisdom of Chan and Taoism combined with the discipline of traditional Kung Fu, the Shaolin Institute offers age-appropriate curriculum in: Shaolin Culture, Shaolin Kung-Fu (Gong Fu), Tai Chi (Taiji Quan), Qigong, Zen Tai Gong and Meditation. The mission of the institute is to empower and enlighten everyone who comes to the institute so as to unveil the greatest potential and assist each in resolve one’s life challenges.

As Master DeRu has expressed: “Life is not easy; To be a warrior in life is even more challenging, but can be done with grit.

Limited onsite registration depending on availability

School provides 9 night accommodation/residence in school for $17.00/day Certificates are available only after testing approval

This year Shaolin Intensive training camp comes to her 31-year anniversary. The camp continue her conscious blue prints to train youth and adults whose families see and believe well rounded character training through high discipline and grit. Over 1500-year old wisdom of Shaolin Zen and GongFu tradition has been revealed out to provide guidance to one’s life journey with live education which to free the body and the mind.