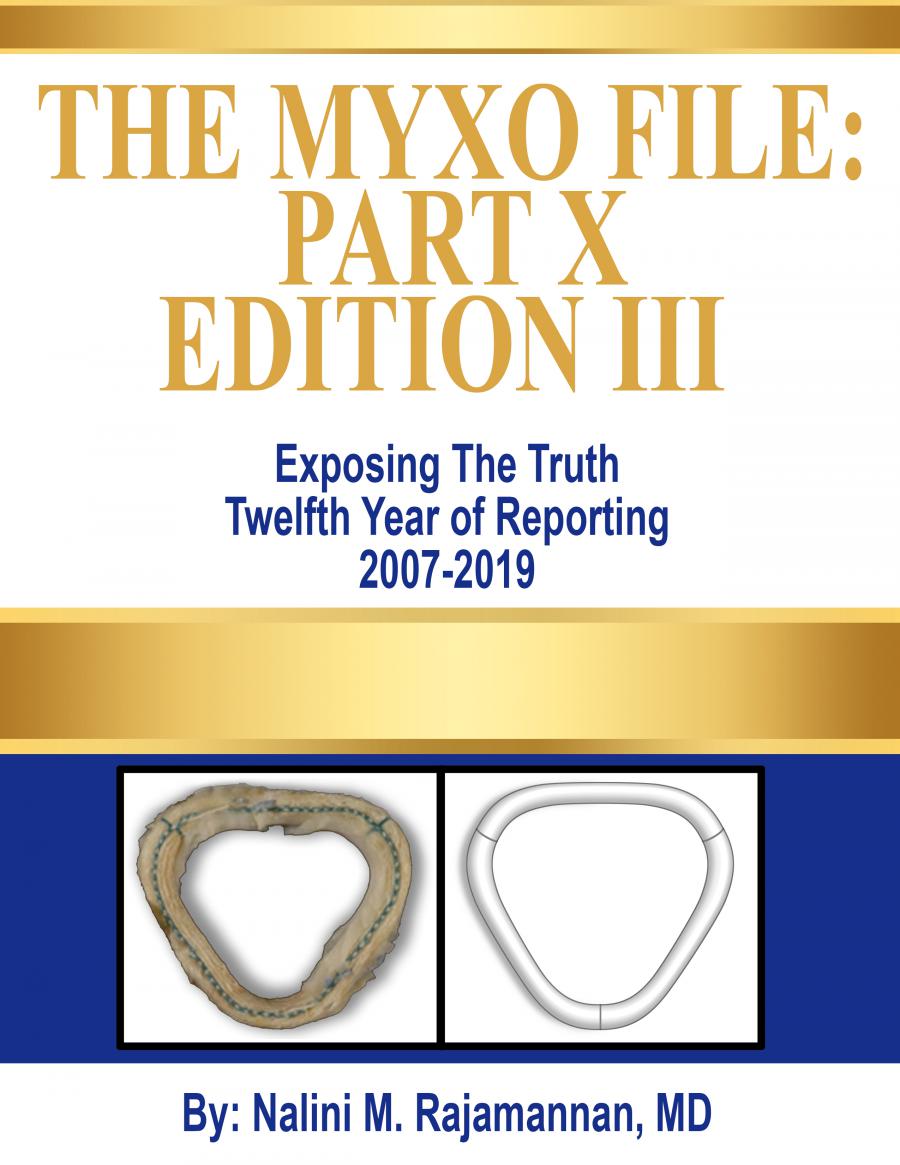 The Myxo File and the Myxo Report outlines the research testing.

Press Conference Wednesday May 29, 2019 at 11 Most Sacred Heart of Jesus Cardiology and Valvular Institute

My cardiologist told me, ‘You’re alive probably only because you’ve worked so hard at staying alive.’”

SHEBOYGAN, WI, UNITED STATES OF AMERICA, May 28, 2019 /EINPresswire.com/ — A Sheboygan cardiologist will give a briefing Wednesday with new information regarding hundreds of open heart surgery patients who received an experimental heart valve ring without their consent.

Dr. Nalini Rajamannan has been fighting for more than a decade to obtain documents confirming that patient protections were bypassed during open heart surgery for hundreds of patients at Northwestern University and elsewhere.

The documents she obtained recently through a Freedom of Information Act request reveal systematic failures that allowed a renowned Northwestern University surgeon to implant an experimental device he invented into patients without their consent.

And Rajamannan recently discovered the testing was performed in Ohio, Florida and Texas in addition to Northwestern Memorial Hospital patients.

The former valve director at Northwestern’s Bluhm Cardiovascular Institute, Rajamannan originally was involved in the study of the heart valve ring. But she removed herself when she realized patients hadn’t given consent and has been reporting the situation to University officials for the past 13 years.

After working and consulting with several hospitals in Wisconsin—Prevea, St. Nicholas, St. Vincent’s, Holy Family Memorial—and Bellin in Green Bay, she continues her work as a private practice in Sheboygan,Wisconsin as a heart valve specialist. She continues to fight for the rights of patients nationwide who received these experimental heart valves in 2006-07 in Illinois and three other states.

An article published Thursday in The Daily Northwestern confirms that Northwestern’s chief cardiac surgeon didn’t have university, or patient approval to implant the heart valve rings he invented.

Among the documented issues cited by the newspaper and in FOIA documents:

• The device was not approved by the Food and Drug Administration, but should have required that approval.
• The experimental device, invented and patented by Northwestern’s Dr. Patrick McCarthy, was implanted without patients’ consent in 2006-07.
• The surgeon continued implanting his invention and studying outcomes even after he told Northwestern’s ethics board that he had terminated the study.
• To counter ill effects from the experimental heart surgery, patients were asked to see “a psychiatrist.”
• The surgeon later published selected results in the American Association of Thoracic Surgeons Journal. He omitted several adverse outcomes from the journal article.
• The 667 patients who received the valve ring before it was recalled never have been told of the recall or of the associated risks, even though several patients have had issues ranging from heart attacks to death, as written in a letter by the FDA to Sen. Charles Grassley, Chairman of the Senate Finance Committee.
• Congressman Glenn Grothman received a letter from the FDA indicating no further help for the patients.
• Senator Ron Johnson received a letter from the office of the Inspector General for HHS indicating no help for the patients.

The case has been investigated by the US Senate Finance Committee, Sen. Charles Grassley, the House Government Oversight Committee, Congressman Glenn Grothman, and The US Senate Committee on Homeland Security, Sen. Ron Johnson.

In the past, the case was largely dismissed as a series of innocent mistakes. Documents obtained under the FOIA request, however, suggest otherwise.

Patients who received the valve ring have renewed hope that the hospital and surgeon will be held accountable, according to The Daily Northwestern article.

One of the patients, Maureen Obermeier, has filed a 1401 petition to ask for a new trial in Obermeier versus Northwestern etc 08-L-012426 in Cook County Circuit Court. Oral arguments are scheduled for June 13.

An excerpt from The Daily Northwestern article:

The outcome of the new lawsuit is still to be determined, but Obermeier said she is hopeful that the FOIA documents are a turning point that will finally “end the cycle of horrible behavior.”

But even if the lawsuit is settled in her favor, Obermeier has to deal with the ramifications of her 2006 surgery for the rest of her life. She will continue to rely on a number of medications and have to live a restricted lifestyle.

“My life is completely different now,” Obermeier said. “My cardiologist told me, ‘You’re alive probably only because you’ve worked so hard at staying alive.’”

A link to full The Daily Northwestern article: https://dailynorthwestern.com/2019/05/23/top-stories/in-focus-years-after-surgery-new-documents-renew-patients-malpractice-claims-against-northwestern-memorial-doctor/

One of the nation’s most respected college newspapers, The Daily Northwestern has won dozens of national and regional awards. The Daily has won the Pacemaker — long regarded as the Pulitzer Prize of college journalism — nine times since 2000.

Rajamannan praised The Daily Northwestern for its journalistic investigation into the decade-plus-old case.

She encouraged the 667 patients, lawmakers, regulators, reporters and patients’ rights advocates to read the FOIA documents themselves to decide whether they believe patients’ rights were protected.

“The response should be immediate under the federal laws under the Nuremberg Code and the Belmont Report which protect US citizens,” Rajamannan said. “These patients should be informed of their unknowing participation in the prospective clinical trial. They should receive a full review of their medical history and receive proper medical care moving forward.”

On Wed, May 29, 2019 at 11 am, Dr. Rajamannan will hold a press briefing at her Sheboygan office to give an update on these investigations to help the patients get the information needed for their overall health care.

Dr. Nalini Rajamannan is a heart valve expert in the field of cardiovascular medicine. She has been researching heart valve disease for 31 years. She earned her undergraduate science pre-professional degree from the University of Notre Dame, her Medical Doctorate from Mayo Medical School and her post-graduate training in Internal Medicine and Cardiology at the Mayo Clinic. She also worked at the Mayo Clinic as a staff consultant in Internal Medicine. Currently, she practices consultative medicine specializing in Cardiac Valvular Heart Disease at Most Sacred Heart of Jesus Cardiology and Valvular Institute, WI.